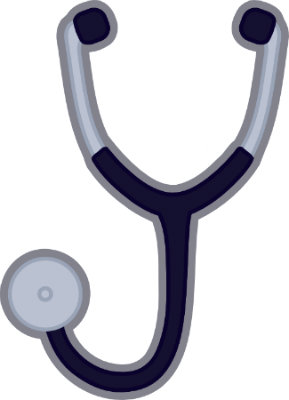 Testimony before the Vermont Public Service Board (PSB) 7/29/14

My name is Sandy Reider, I am a primary care physician in Lyndonville, and I have been practicing clinical medicine in Vermont since I received my license in 1971.  [Dr. Reider is a graduate of the Harvard University School of Medicine — Editor.]

In the interest of full disclosure, I am not being paid for involvement in this issue, nor did I seek this out; rather, it found me by way of a patient I had known well for several years, and who, in late 2011, suddenly developed severe insomnia, anxiety, headaches, ringing ears, difficulty concentrating, and frequent nausea, seemingly out of the blue. This puzzled us both for a few months before we finally came to understand that he suffered from what was, then, a relatively new clinical entity known as “wind turbine syndrome”, related in his particular case to the comparatively small NPS 100 KW turbine that began generating power atop Burke Mountain in the fall of 2011.

In the course of the 2012 legislative session, I described this patient in detail in testimony for the Senate Natural Resources and Health Care Committees, as well as the Governor’s Siting Commission. Since his symptoms were so typical and similar to those described by thousands of other individuals living too close to large wind turbines all over the globe, I have attached my testimony for the Senate Health Care Committee and encourage you to review it for its very characteristic description of what it is that this board, I trust, hopes to mitigate by recommending more protective sound standards for these industrial wind installations.

I should add that I have seen 4 additional patients living close to the large Sheffield and Lowell projects, as well as an individual living near another single NPS 100KW turbine in Vergennes. All presented with similar, though not identical, symptoms to those described in my testimony.

Over the past 2 years I have reviewed much of the relevant scientific literature, and out of my 42 years of experience and perspective as a clinician, respectfully offer the following observations and comments.

Firstly, I do not doubt at all that these large turbines can and do cause serious health problems in a significant number of persons living nearby, even though the vibrational-acoustic mechanisms behind this harm are not yet completely understood (1,5). Repetitive sleep disruption is the most often cited adverse effect, and disturbed sleep and its resulting stress over time is known to cause or exacerbate cardiovascular illnesses (2, ), chronic anxiety and depression, as well as worsening of other pre-existing medical problems. This is especially concerning for the most vulnerable among us — children, the elderly, those who are naturally sensitive to sound,  or prone to motion sickness or migraine headaches, and, as mentioned, those who are  unwell to start with.

The position adopted by developers of large industrial wind projects, and thus far supported by regulatory and health agencies, has been that there is no evidence of a direct effect on health from wind turbines; rather, that the claimed adverse health effects are indirect, due mainly to the individual’s negative attitude about the wind turbines (so-called “nocebo” effect), and therefore it is their fault, it’s all in their heads, and so on. Not only is this incorrect, it is disingenuous. There is simply no clinical justification for ignoring harm being done to individuals and communities, whether direct or indirect, on these grounds — simply put, harm is harm, whatever the mechanism.

However, good evidence for direct adverse effects has existed since the mid-80’s when Neil Kelley headed a group of researchers, under the auspices of the US Department of Energy and NASA, and found conclusive evidence that adverse effects, very similar to those that describe “wind turbine syndrome”, were due primarily to very low frequency sound and inaudible infrasound (6). This role of infrasound was subsequently confirmed by Kelley’s team under controlled laboratory conditions, and resulted in a complete redesign of turbines from the downwind trestle-mounted turbines to today’s upwind turbine on a single massive tower.  Furthermore, he recommended protective maximum levels of this low frequency sound.

The joint radiation levels (expressed in terms of acoustic intensity and measured external to a structure) in the 8, 16, 31.5 and 63 Hz standard (ISO) octaves should not exceed band intensity threshold limits of 60, 50, 40 and 40 dB (re 1 pWm –2) more than 20% of the time. These figures compare favorably with a summary of low-frequency annoyance situations by Hubbard.

(It is worth noting that very often infrasound levels are higher inside a building than outside, the structure acting as a resonating chamber and amplifying the lower “vibration” frequencies. Thus measurements for low frequency sound should be made inside the structure as well as outside. Also, low frequency sound levels are not only building design and geometry specific, but also site specific, especially in a place like Vermont where the topography and climactic conditions are so variable. There may be unacceptable indoor infrasound levels in one home, while another home over the hill may have undetectable or very low levels.)

The wind industry’s assertion that the Kelley study is irrelevant and that infrasound levels are negligible with the current, newer turbine design and may be ignored is unfounded, and more recent evidence confirms this.  (See the 2012 Falmouth study by Ambrose and Rand; Bob Thorne’s excellent quality of life study in 2011 [12]; Steven Cooper’s preliminary results in Australia, final results due in September 2014 [11]; and others.)

The aforementioned studies were performed by independent professional acousticians not connected to the wind industry.  Incidentally, the severely affected patient described in my 2012 testimony never did perceive any audible noise from the turbine (and this is quite typical, the sound is more felt than heard), nor did he harbor any feelings pro or con about the installation when his problems began, though after he understood the source of his ill-health, I have no doubt that the “nocebo” effect may have added to his stress, adding insult to injury.  He has since abandoned that home, and is once again sleeping soundly and feeling well.

The current sound standards, based as they are on dBA weighted acoustic measurements, gives particular weight to audible frequencies in the soundscape, but very little or no weight to low sound frequencies and infrasound, particularly below 10 Hz, which comprises a significant proportion of the sound generated by large turbines. People do not hear dBA, they hear qualitatively different sounds, birds, insects, running water, wind in the trees, etc.  Basing noise criteria solely on this single number ignores the unique nature of the sound produced by large wind turbines, with its constantly  changing loudness, frequency, harmonics, pitch, and impulsive quality.

It is precisely these qualities that make the sound feel so intrusive and annoying, especially in quiet rural environments where these projects are usually located (12).  Parenthetically, the word “annoying” is somewhat misleading, as it implies a minor, temporary, or occasional nuisance that perhaps might be mostly ignored, rather than what it is: a  repetitive stressor that can degrade one’s short and long term health and well being, and from which there is no escape over the lifetime of the project short of having to abandon one’s home.

It is worth repeating here that the current Public Service Board threshold  of 45 dBA of audible sound, averaged over an hour, has never been proven safe or protective, and that most studies agree that  audible sound should not exceed 35 dBA, or 5dBA above normal background sound levels. (This is especially important in rural areas where background noise is minimal.)  The level should be a maximum, not an hourly average. Above 35 dBA there are likely to be significantly more complaints, particularly difficulty sleeping. 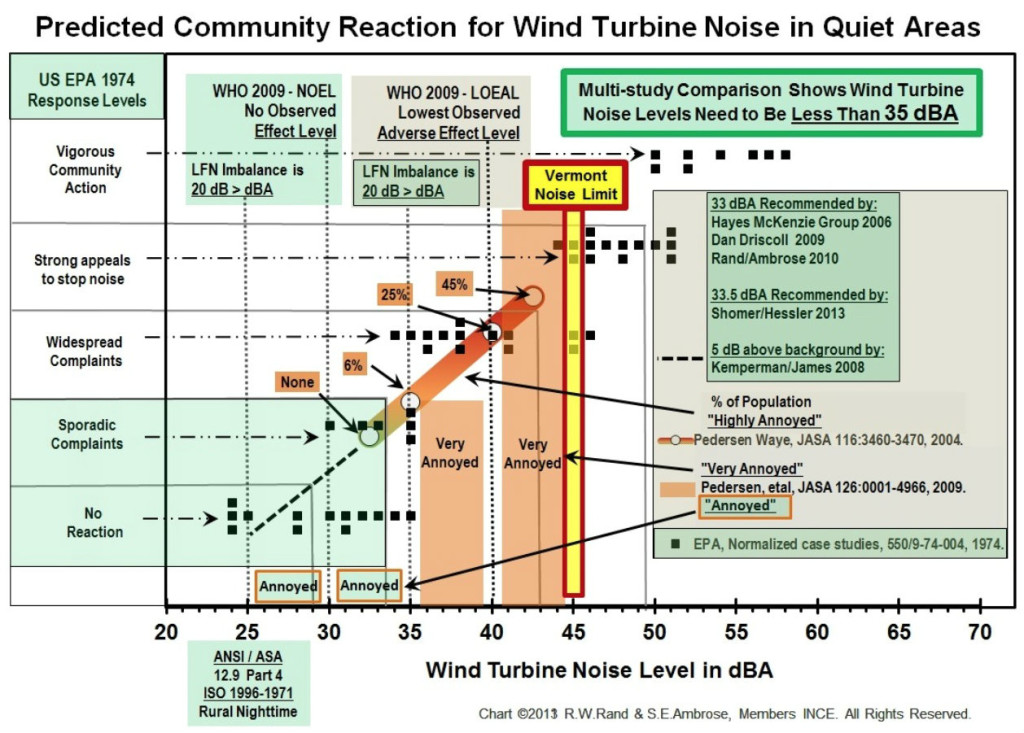 Before concluding, I would like to emphasize that the bulk of scientific evidence for adverse health effects due to industrial wind installations comes in the form of thousands of case reports like the patient I described. One or two sporadic anecdotal cases can legitimately be viewed with a wait-and-see skepticism, but not thousands where the symptoms are so similar, along with the ease of observing exposure and measuring outcomes, wherever these projects have been built. I agree with Epidemiologist Carl Phillips, who opined that “these case reports taken together offer the most compelling scientific evidence of serious harm.  Just because the prevailing models have failed to explain observed adverse health effects does not mean they do not exist”, and, as he succinctly, though in my opinion a bit too harshly, concluded: “The attempts to deny the evidence cannot be seen as honest scientific disagreement and represent either gross incompetence or intentional bias” (13).

I am aware that the members of the PSB bear a heavy responsibility for Vermont’s overall energy future and have many other issues on their plate besides this one. Rather than presenting you with a long list of literature references, most of which would likely go unread (but they are included just in case ), I recommend a careful review of just one study in particular:  Bob Thorne, a professional acoustician in Australia, presented an excellent and well thought-out clinical study to the Australian Senate in 2011 (12). It really does cover the waterfront, including WHO quality of life measures, audible and infrasound measurements, and health measures, in a balanced and scientific way. For your convenience there is a hard copy of this study included with my presentation today.

His comprehensive (including the full sound spectrum, not only dBA weighted sound) and protective recommendations for sound criteria are reasonable, and if adopted, would be likely more acceptable to neighboring households and communities. However, given that wind developers are these days building bigger turbines atop taller towers in order to maximize power generation and profits, adoption of these safer limits would necessitate siting the installations farther from dwellings.  A 1-2 km setback is not nearly sufficient; significant low frequency sound pressure measurements have been recorded in homes 3-6 miles from large projects in Australia.

The measures of wind turbine noise exposure that the study has identified as being acoustical markers for excessive noise and known risk of serious harm to health (significant adverse health effects):

Measures (1-6) above are appropriate for a ‘noise’ assessment by visual display and level comparison. Investigation of health effects and the complex nature of wind turbine noise require the more detailed perceptual measures of sound character such as audibility, loudness, fluctuation strength, and dissonance.

To exclude careful independent well-designed case studies like Thorne’s ( and others ) in a review of the scientific literature that purports to be thorough is, I repeat, a serious omission and is not “scientific”. Careful consideration of these independent well done studies, if nothing else, should encourage regulatory agencies to adopt a much more precautionary approach to the siting of today’s very big industrial wind projects in order to adequately protect public health.

For better or worse, in today’s “information age” we are perhaps too fascinated by computers and mountains of data, but truth is truth, wherever you find it, even in small places.

*Many thanks to Dr. Sarah Laurie, CEO of the Waubra Foundation, for her tireless work, and generosity in sharing so much information.

1.  Pierpont, N 2009  from the executive summary of her peer-reviewed study, http://waubrafoundation.org.au/resources/wind-turbine-syndrome-executive-summary/

13.  “Properly interpreting the Epidemiological evidence about the health effects of Industrial Wind turbines on nearby residents” Bulletin of Science, Technology and Society vol 31 No 4 (August 2011) pp 303–315 http://waubrafoundation.org.au/resources/properly-interpreting-epidemiologic-evidence-about-health-effects/