Editor’s note:  The following is a report on a demonstration recently held in Columbus, Ohio, against the American Wind Energy Association, which was holding a so-called Midwest Summit. 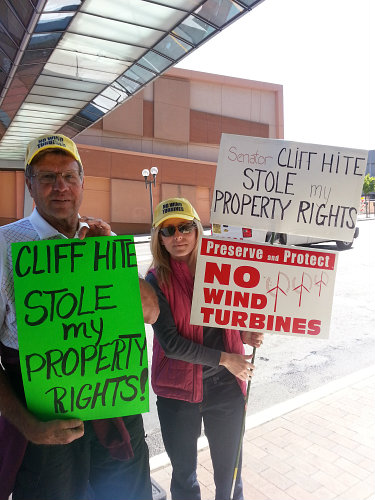 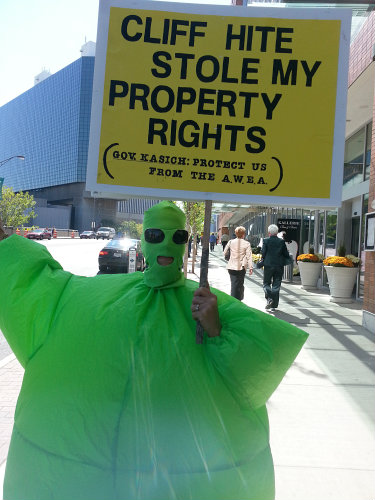 A great day in Columbus, Ohio, with about thirty protesting citizens marching in front of the Hilton Hotel where the American Wind Energy Association was holding its Midwest Summit.

It was an IMPORTANT effort coordinated by the Interstate Concerned Citizens and Kevon Martis.  We were joined by wind warriors from Indiana, Michigan and Pennsylvania!  Thank you!

Woody Allen said once that “Eighty per cent of success is just showing up.”  Amen.  Please read the breaking coverage from the legislature’s news service.  Woody was right.

On the eve of a key senator’s unveiling of his plan to overhaul Ohio’s clean energy law, the wind industry warned that the proposed changes cloud a sunny forecast for renewable energy development in the state.

The American Wind Energy Association’s news conference on Tuesday kicked off what will likely be a pitched battle over Republican efforts to scale back the state’s renewable energy and energy efficiency requirements on electric utilities (SB221, 127th General Assembly).

Among other things, the substitute version would eliminate the requirement for half of the 12.5% of Ohio’s electricity supply to come from renewable energy facilities located in the state, Sen. Seitz said last month. The sponsor said a federal court ruling found in-state energy preferences elsewhere were an unconstitutional violation of the Commerce Clause. (See Gongwer Ohio Report, August 21, 2013)

Eric Thumma, director of institutional relations for Iberdrola Renewables, said the in-state renewable energy requirement was a “prime driver” for the company to construct the 304-megawatt Blue Creek Wind Farm in Van Wert and Paulding counties.

“The policies that the Ohio General Assembly put in place are working. We’re meeting the benchmarks,” he said, urging lawmakers not to alter the renewable energy portfolio standards (RPS).

New technology that enables turbines to generate electricity with winds as slow as six miles per hour have also made wind power more viable in the state, she said.

Dayna Baird, contract lobbyist for AWEA, said changes to the RPS could jeopardize development of the seven proposed wind farm projects that have already been certified by the Ohio Power Siting Board and are ready to move forward.

Wind developers are waiting for electric utilities to issue the next request for proposals to secure a long-term contract before breaking ground on the projects, she said. “When the next RFP does come out, there’s going to be a lot of serious competition.”

Meanwhile, another group protested what it called “the lies and manipulation” of the wind industry and its legislative allies during a rally scheduled later in the day.

“The emperor has no clothes and it is time the media and state legislatures admit it,” he said in a news release.

The wind industry is dependent on “massive public subsidy at both the federal and local level as well as on unconstitutional state mandates,” the group said, and warned that other countries are working to undo policies that encourage wind development.

“The U.S. and Ohio should learn from the failures abroad, and stop wasting taxpayer dollars on an endeavor destined to raise electricity rates, make the U.S. a less attractive place to manufacture and ultimately costing jobs,” Interstate Concerned Citizens said.

In other developments, the Ohio Advanced Energy Economy Institute said it would unveil an Ohio State University study that shows Ohioans will pay $3.65 billion more on their electricity bills over the next 12 years if Sen. Seitz’s proposal is enacted.

Ohioans saved 1.4% on their electricity bills since energy efficiency and renewable energy standards were enacted in 2008, according to the study. The law also stimulated investment in the energy sector that expanded gross domestic product by $160 million in 2012, and created more than 3,200 Ohio jobs in the period from 2008 to 2012.

Sen. Seitz has said his bill would also make it easier for electric utilities to comply with the state’s energy efficiency standards and limit the amount they could spend on the mandate.