Editor’s note:  The following “property analysis” is worth reading.  It’s by Lansink Appraisals & Consulting, Ontario, Canada.  It shows, yet again, that wind turbines have a dire effect on property value.

My favorite part is the letter reproduced at the bottom of this posting.  It’s a fuzzy reproduction, unfortunately.  Here’s the body of the letter.  Names of individuals have been “whited out.” 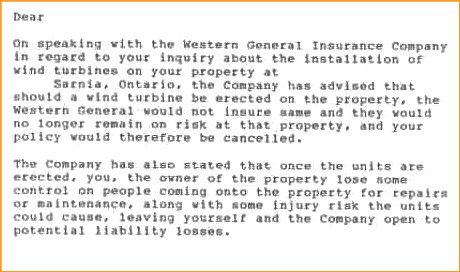 Market evidence suggests that ‘dwelling properties’ will be harmed or injured by the construction, use, and maintenance of wind turbines situated on properties located in the vicinity. Real or perceived nuisances resulting from wind turbines produces buyer resistance that results in price diminution.

The erection of a wind turbine creates apprehension in the general public, which makes the property less desirable and thus diminishes the prices of neighbouring property. Continuing scientific uncertainty over the adverse health consequences of wind turbines only serves to perpetuate the debilitating effect of wind turbines on property prices.

By including the Transfer of Easement in Gross in the deed/transfer of the properties sold by Canadian Hydro Developments, Inc., it is reasonable to conclude that Canadian Hydro Developers, Inc. was fully aware of problems associated with…heat, sound, vibration, shadow, flickering of light, noise (including grey noise) or any other adverse effect or combination thereof resulting directly or indirectly from the operation of the Transferee’s wind turbine facilities situated…within the Townships of Melancthon and Amaranth, in the County of Dufferin…’ and that the turbines …’may affect the living environment’…”.

It is also reasonable to assume that a property that has a wind turbine erected on it will suffer a similar price diminution and will be injuriously affected.

The Future: Given that wind turbines are a relatively new phenomenon in Ontario (2005), it may be that in the future a buyer will simply refuse to purchase a property within the vicinity of a wind turbine. If there is no buyer, there may be no value.