“Wind turbines definitely lower local property values. The only question is, how much?” 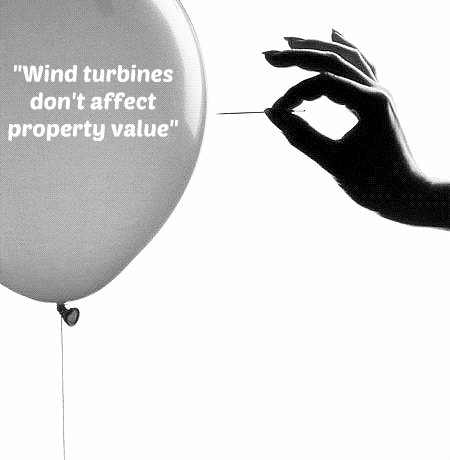 Large wind generators (IWTs, for “industrial wind turbines”) cause health problems for nearby residents, kill birds, and destabilize the power grid. Something those impacts have in common is that it would be possible for them to not be the case, and so attempts to deny them represent merely a refusal to acknowledge the overwhelming empirical evidence. That “merely” contrasts with another impact, IWTs lowering local residential property values. Denial of that not only requires ignoring the specific empirical evidence, but requires a suspension of well-established principles of economics.

The value of a piece of real estate is what someone is willing to pay for it. More specifically, in a theoretical perfect market, it is what the person (or family or other entity) who values it second-most would pay for it. This is because whoever values it first-most would have to pay $1 more than that value in order to win the bidding for it. Anything that would cause that person in the second-most position to value the property less, therefore, lowers its value.

Many people are aware of the potential health effects of nearby IWTs, and thus will value a property enormously less if it is near IWTs. For many others, the audible noise or visual impact would lower the value somewhat. If the person who values a property second-most falls into either of these groups, the value of the property will be lower. There is no reason to believe that anyone prefers to have a nearby IWT, so there is no chance that person would like the property more and thus increase the value. (Note that this analysis does not consider the net change in the value of a property with income from IWTs that are actually on the property. For such properties there will still be a decrease in value from the proximity but might be a net increase because the income more than makes up for this.)

Moreover, even someone who does not personally worry about the health risk or find the aesthetic impacts objectionable will know that others do. Thus, he will know that the potential resale value of the property is lower, and since that contributes to the value, this will tend to push down the value for even those who do not mind living near the IWTs.

Thus, there is simply no question that IWTs lower the value of nearby property, and the only legitimate question is “how much?”, not “does it occur?” Anyone who insists that there is no reduction in value is trafficking in nonsense that is actually one step worse than the nonsense that there are no health impacts, in that it denies both the evidence and the irrefutable logic.

Of course, in reality markets do not function exactly like the theoretical simplification, but the same principle applies in the real world with only a bit of additional complication. The sale of a property does not attract the attention of everyone who might want to bid, and so the second-highest valuation is not based on every possible buyer, but only on those who are in the market at the particular time. But this changes nothing. More significantly, the market is not a perfect auction, so the highest offer (which determines the market value of the property) does not consist literally of someone outbidding the second-highest by $1, but rather some guesswork about what bid is enough to convince the seller that no better offer is available. But this offer will be no higher than the potential buyer’s value for the property, which will be lowered by the factors noted above, and the guesses about alternative offers will be pushed downward by those factors also. Thus the exact real world results may not be as predictable as the theoretical case, but the fact that there is a reduction in value is unchanged.

Finally, the person/family who values a property the most is almost always, by far, the one who is living there. This is why very few sales result from an interested buyer making an offer for a property that is not actively for sale. So when residents suffer problems from nearby IWTs that make them want to move, the market value is dramatically reduced because the bidding for the property no longer includes the person who previously placed the highest value on it. Even worse than this impact on the market value, the benefits from that piece of land to overall human happiness — because it no longer provides net benefits to those who valued it the most — is reduced even more.

Empirical studies are required to determine how much property values are decreased near IWTs, and that magnitude might affect policy decisions and certainly affects cost-benefit analyses. The methods for doing such studies are highly imperfect; hence, there is room to criticize the estimated magnitude.

One thing we know for sure is that any study or assertion that insists there is no impact — is wrong.