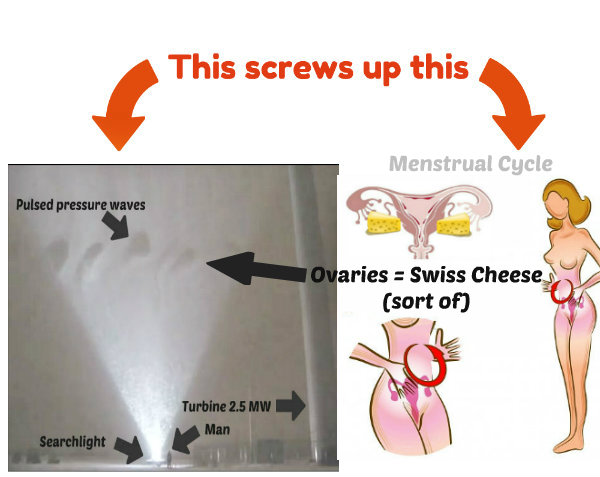 .
“All my female employees are complaining of irregular menstruations, and several have permanent headaches” (Boye Jensen, Nursery Owner, Denmark)

The Danish press reports the case of a garden centre (nursery) going out of business because of nearby wind turbines. Headaches are frequent among employees, and female workers complain of unusual bleeding and problems with their menstrual cycles. They are worried that more serious illnesses may follow.  Five have recently resigned. The owner is now closing his business for fear of being held liable should a child be born with deformities, as happened to numerous mink puppies at a fur farm near wind turbines in Jutland.1 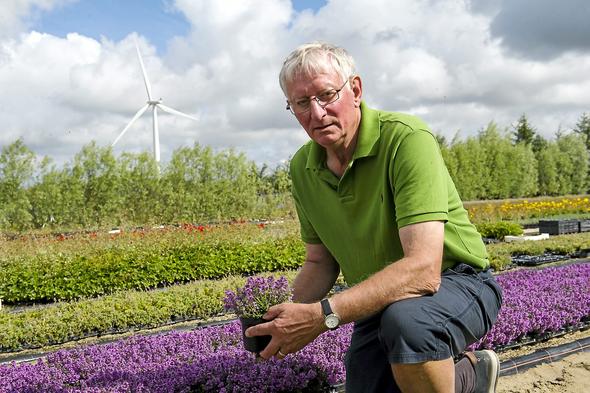 Boye Jensen, the owner of Lammefjordens Perennials, is 67. He started his nursery 43 years ago and it became a prosperous business with 15 employees and annual sales of 12 million krones (equiv. $ 2.1 million). He was planning to continue working for another 6-7 years, then sell the nursery. But his business is now worth nothing, creating an enormous financial loss.

He is discussing with his lawyer whether to sue Vattenfal, the company that owns the wind turbines, or the Municipality of Holbaek, which approved their installation 400-700 metres from his nursery. He expects to go to court and seek damages of several million krones.

“Himself a neighbour to 127-metre high wind turbines since their installation three years ago, Boye Jensen has long been convinced that low frequency noise emitted by the turbines makes people ill, as they do animals.”2 Then, recently, he heard the tragic news from Kaj Bank Olesen’s mink farms.1  This, along with the resignation of several of his employees for health reasons, made him realise his business had become untenable because of the wind turbines. “The nursery owner made this hard decision after a mink breeder in Jutland was able to establish a causal link between the loss of a third of his mink puppies, deformed or stillborn, and several giant wind turbines erected nearby.”2

The story made the news in Denmark,2,3 and Member of Parliament Karina Adsbøl expressed her concerns to the Minister of Health at a parliamentary hearing.  The Minister, typically, replied by addressing other, less important issues mentioned by the MP, and ignoring the important ones, i.e. wind turbines causing birth defects in animals forced to live near them, and disrupting women’s menstrual cycles.4

The World Council for Nature (WCFN) is calling attention to the fact that, as occurred for tobacco, asbestos, thalidomide, etc., governments are siding with private financial interests in ignoring or denying the existence of obvious health problems linked to wind turbines. As is the case for the millions of birds and bats killed yearly by the turbines’ blades, mendacious studies are published by unscrupulous consultants, and by professionals and universities happy to oblige their benefactors. Hypocrisy is rampant, species are fast disappearing from our skies, and thousands of windfarm neighbours are being submitted to torture. The word “torture” is not an exaggeration: sleep deprivation is indeed a recognised form of torture.

In Denmark, as elsewhere in the world, many rural families are suffering, particularly since the manufacture of the mega turbines (1 MW and over), which emit more infrasound as they grow bigger. This may explain why the complaints are growing louder. How much longer can this suffering be ignored, or even denied by health authorities?

Some countries, including Canada and Australia, have commissioned studies into the matter of noise emitted by windfarms. But the studies’ scope and methodology doom them to failure, perhaps intentionally. What is really needed is:

Most of all, as a precaution, no mega turbines should be erected less than 10 km from habitations until these studies are completed, published and analysed. There is indeed compelling evidence that infrasound travels much farther than other noise, and tortures sensitive people in their homes at distances of 10 km and more. Shorter distances could be temporarily set for smaller turbines, in proportion to their generating capacity.

WCFN calls upon the Danish government to intervene in favour of victims. A wealth of evidence is available, including peer-reviewed studies, that warrants applying the precautionary principle without delay.5  Children are particularly at risk — evidently even the unborn.

WCFN’s primary goal is the conservation of biodiversity. A sane and responsible human population is the single most important means of achieving this goal. A letter of protest is being sent to the Danish government.

2.  Translation of the article from the Nordvestnyt (North West News) on the closing of the garden center:  http://wcfn.org/documents/wind-turbines-affect-menstruation-danish-press/

4.  Video.  Member of Parliament, Karina Adsbøl, addresses her concerns to the Minister of Health, describing the deformities at the mink farm and the menstrual problems at the nursery:  http://wcfn.org/documents/windfarms-affect-menstruation-danish-parliament/

Editor’s note:  The following is the Danish source for the above article.  It was published in the print edition of the Danish newspaper, Nordvestnyt (North West News), 7/3/14.  It was translated into English by Greta Gallandy-Jakobsen.

Click here for the original, and here for another Danish version of the same story, and here for our source of the English translation by Ms. Gallandy-Jakobsen.

For almost three years, now, 10 giant wind turbines at Lammefjord near Gislinge have blown plenty of power to the energy company Vattenfall and to consumers. But now they have also blown away a 43 year old plant nursery and its 15 employees, which had annual sales of 12 million krones [2.1 million dollars].

The owner of Lammefjordens Perennials, Boye Jensen, has chosen to close his nursery almost entirely, located as it is within 400-700 meters of three wind turbines. There will just be a few employees left, and they will work only occasionally. The owner made this hard decision after a mink breeder in Jutland was able to establish a causal link between the loss of a third of his mink puppies, deformed or stillborn, and several giant wind turbines erected nearby.

Himself a neighbour to 127-metre high wind turbines since their installation three years ago, Boye Jensen has long been convinced that low frequency noise emitted by the turbines makes people ill, as they do animals. “When the mink case became known to the public, five of my staff resigned. You have to know that all my female employees have been complaining of irregular menstruations, and several workers have permanent headaches.  They are also afraid of getting chronic illnesses, and I don’t want to be responsible for one of them giving birth to a deformed child. So, I am shutting down my life-long enterprise.”

Boye Jensen’s big problem is that the authorities are still not sure that giant wind turbines make people sick, and it is uncertain whether he can get compensation. But the 67-year-old nursery owner is going for a compensation in the millions. “I am closing my business because of the turbines. Otherwise I would have continued for 6-7 years, and then I would have put the nursery on the market. But now the property is unsalable.  First, together with my lawyer, we need to find out whom we will take to court: Vattenfall, which own the turbines, or the municipality of Holbæk, which approved their installation.”

In Holbæk, Mayor Soren Kjærsgaard is sad that Lammefjordens Perennials are now withering away into nothing. But he is not worried about a lawsuit for damages. “We have tried to help Lammefjordens Perennials by getting a medical officer from the national health administration, as well as the Ministry of Public Health, to look into the matter. But the municipality has no legal ground for stepping in. The windfarm legislation sets very clearly what may and may not be done, and Vattenfall has been complying with noise limits.

End of translation:  Original article in Danish (print edition), in PDF format: Kæmpevindmøller lukker planteskole på Lammefjorden The first part of the article is available online, in Danish:“The owner of the nursery at Gislinge fear for its employees’ health because of low frequency noise from wind turbines.”  The story is also mentioned in the Jyllands-Posten, one of Denmark’s three leading newspapers.