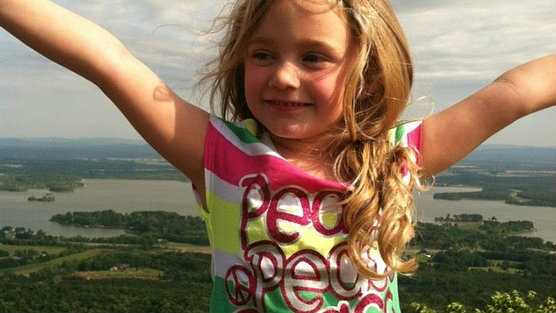 When Cara Pearson Coker picked up her daughter Lillian from school on March 12, Lillian presented her with a piece of notebook paper with the word “Partition” scrawled at the top.

Cara asked her about it, and Lillian, a kindergartener, accurately explained what a petition was and that she is petitioning to stop the building of windmills on Cherokee Rock Village, a public park in Cherokee County. She calls the place her “beautiful mountain.”

So on Lillian’s behalf, Cara started an online petition on Change.org asking state representatives to “Say NO to wind turbines in Northeast Alabama!”

On the petition page, Cara explains why the cause is so important to her daughter:

My name is Cara Pearson Coker and I am creating this petition for my six year old daughter, Lillian and I will explain why. On March 12, 2014, I picked Lilli up from school and as we were walking out of the door she handed me a piece of notebook paper with “Partition” written in kindergartener handwriting across the top. She asked, “Will you please sign my petition, Mama?”

My previous profession of 14 years was education so I asked, “What’s a petition?” Lillian quickly replied, “A petition is something you get people to sign if you want someone to do something or stop doing something. Ok…like say somebody is going to tear down my favorite playground. I would start a petition for them not to tear it down and if I got enough signs they would stop.”

I was quite impressed with her thorough definition and clever example and proceeded with, “Well, what are you petitioning?” Without skipping a beat, Lillian said, “I want to stop those people from building windmills on top of our beautiful mountain! You know the one where we hike and climb? If they put windmills up there then we won’t be able to go there anymore and windmills won’t work here anyway…we don’t have enough wind, Mama! When they build them they’re going to be big and dangerous and they’ll have to tear up the rocks and land. It’s just not a good idea! We HAVE to stop them!”

Powerful words coming from a six year old! Through social networking, word of Lillian’s petition has traveled fast and she has been asked to hand deliver her petition in Montgomery Wednesday, March 19, 2014. When I asked her if she wanted to go to Montgomery and do this her response was, “I have to do it, Mama! Somebody has to stop them from building the windmills on my beautiful mountain!”

I have many thoughts, opinions, and facts about wind turbines, but I’m not going to include them here. This petition was Lillian’s idea and this is her project and she truly believes she CAN save her “beautiful mountain.” I believe she can as well, but not without your help! She is a very bright child and understands that if she doesn’t have enough “signs” it will not be effective, so please sign her petition.

Lillian and I moved to Alabama from Georgia after her daddy, my husband of ten years, passed a way. I grew up in Gadsden, AL and spent a lot of time at Cherokee Rock Village growing up. Once we were settled I began taking Lillian to Cherokee Rock Village. We have done a lot of soul searching and soul cleansing there. She believes she is closer to her daddy in heaven when she is there.

Please show this little girl that she CAN make a difference by signing her petition. All you have to do is sign it and pass it on. She will do the rest! Thank you for your support.

As of 10 a.m. March 18, the petition had garnered 1,125 signatures. Lillian has been asked to hand-deliver her petition in Montgomery on Wednesday. It’s the day of a public hearing on a bill sponsored by Sen. Phil Williams (R-Rainbow City), that would regulate wind energy companies that want to operate wind turbines in the state.

Williams’ bill, The Alabama Wind Energy Conservation Systems Act (SB 12), was inspired by a proposed wind farm project by a Texas-based firm, Pioneer Green Energy, that would stretch from Etowah County to Cherokee County. The windmills or wind turbines would be about 267 to 330 feet tall, have three blades and be spread about ¼ to 1/5th of a mile apart. Some would probably have blinking lights at their tips. The turbines would be part of an agreement between Pioneer and the Tennessee Valley Authority.

Lillian has told news outlets, and YellowhammerNews.com, that hiking at Cherokee Rock Village reminds her of her father, and that people and animals wouldn’t want to go there if wind turbines were built on the mountain.