Germans, furious over wind turbines, burn one in effigy

Editor’s note:  People around the world are fed up with having wind turbines shoved up their asses by the renewable energy zombies.  They’re fighting back.  In Ontario, Canada, a bulldozer was torched, tires were slashed, and local media are predicting this is just the beginning.  (Click here for the blog source.)  Ontarians have discovered that the “social contract” of public meetings, government hearings, government tribunals, and elections are a sham.  Meanwhile, people like the Wrightmans are moving — to the other side of the continent.  (Note to those of you not familiar with Ontarians.  These are among the most long-suffering people on earth.  If this were Quebec, where I was raised, the Quebecois would have torn down these turbines years ago.  But the Quebecois are used to protest; Ontarians are not.)

Watch the news for Australia; we predict there will be dramatic expressions of anger there, shortly.

It stands to reason:  When people have exhausted the conventional avenues of redress and supplication and complaint, and been stonewalled and cynically ridiculed by government agencies, fatuous academics, and the wind companies — they are going to resort to other means of protest.  No, they are not going to vanish into thin air; they simply choose a different venue.

In Germany, the venue is turning dramatic.  Click below to watch the video.  (Scroll down once you open the link.  Look at the photos as you scroll.  Till you get to the bottom of the page, where you will find the video.) 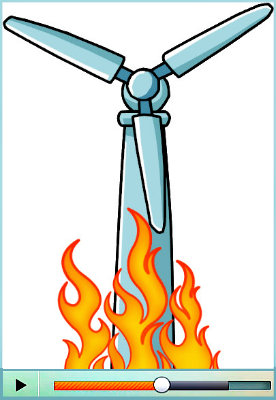