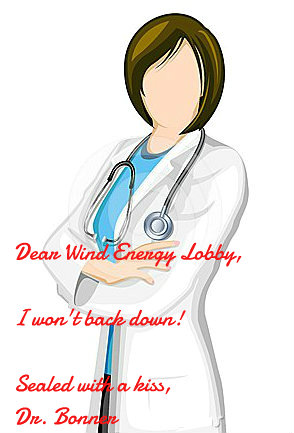 In pushing back against Big Wind’s (predictable) attack, Dr. Bonner notes that (a) there are indeed proven “risk factors” for WTS (as Dr. Pierpont established and identified in her book, “Wind Turbine Syndrome:  A Report on a Natural Experiment,” 2009), (b) the inner ear is almost certainly affected by turbine infrasound, (c) there is a consistent cluster of symptoms worldwide (identified by Pierpont in 2009), and (d), as Pierpont took pains to point out in 2009, not everyone living near wind turbines is affected (since they don’t happen to have the risk factors — just like susceptibility to cancer and any other disease).

In any event, Dr. Bonner is one helluva courageous physician and public health administrator.  Hooray for her!  (Ten to one she’s a pediatrician!)

Click here for a musical tribute to Dr. Bonner’s spirited, “I won’t back down!”  (Turn up your speakers and let ‘er rip!)

One of the most senior doctors in the Department of Health, Colette Bonner, has responded to assertions from the wind lobby that her review on the health effects of turbines was “extremely limited and incomplete.”

In the controversial document, which she sent to the Department of the Environment last year as part of their review of wind turbine guidelines, she controversially stated that while turbines do not represent a threat to public health, “there is a consistent cluster of symptoms related to living in close proximity to wind turbines which occurs in a number of people in the vicinity of industrial wind turbines.”

“These people must be treated appropriately and sensitively as these symptoms can be very debilitating.”

“A number of comprehensive studies carried out internationally in recent years have clearly concluded that wind turbines are not harmful to humans and we would encourage all parties with interest in the issue, including the Department of Health and the Department of the Environment, to study this data,” she said.

“We would also point to extensive work carried out by Professor Simon Chapman, professor of public health in the University of Sydney, in cataloguing the increasing number of independent reviews published on the issue since 2003 which all reached the same conclusions, that wind energy is not harmful to human health,” said Ms Diviney.

But yesterday, Dr Bonner’s spokesman said “symptoms (including sleep problems, headaches, dizziness and exhaustion) relating to living in close proximity to wind turbines have been described in the literature.”

“Not everyone living near wind turbines have these symptoms. Susceptibility to symptoms differs with individuals. According to the current literature, sensitivity to low-frequency vibration is a risk factor. Sensitivity to low-frequency vibration in the body or ears is highly variable in people and, hence, poorly understood and the subject of much debate. Another risk factor described in the literature is a pre-existing migraine disorder. Other candidate risk factors for susceptibility to wind turbine related symptoms are age related changes in the inner ear.”

Citing a 1960s report, he also stated “noise-induced respiratory pathology is not a new subject.”