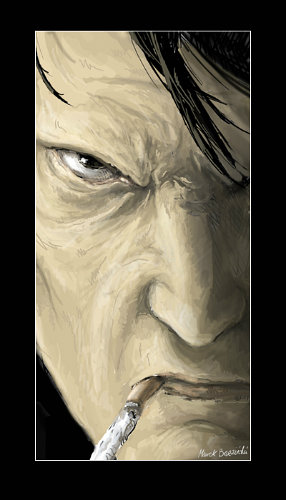 WHITE SHIRTS:  A German firm is hiring muscle as security at a controversial construction site in Miaoli, but there is a problem: The guards are operating well beyond their authority.

It became clear as the taxi entered the narrow road, hemmed in on both sides by lush rice fields, that we were not welcome there.

The moment the cab driver brought his car to a halt and rolled down his window, a group of individuals who were sitting on rocks, smoking cigarettes, stood up and approached the car. Most of them wore white construction helmets, simple white shirts and black pants.

The yellow construction cranes jutting above the tree line indicated that we had reached our destination. We were in Yuanli Township (苑裡), Miaoli County, at the site of a controversial wind turbine project by German wind power company InfraVest GmbH, which for the past eight months has met growing opposition by villagers, most of them farmers, who claim that the devices are intrusive and too close to their homes.

We stepped out of the car and were immediately approached by one sunglasses-toting white shirt, who curtly asked us who we were and what we wanted. A few meters away, a group of men, one of them busily chewing on betel nut, cast hostile glances in our direction.

After we had explained the reason for our visit and that this writer was with the Taipei Times, a woman — InfraVest Taiwan vice president Wang Yun-yi (王雲怡) — joined us and agreed to give us some background information about the project.

As she was doing so, a white shirt pointed a hand-held video camera and started filming us.

Our brief conversation with Wang over, we began taking pictures of the site, wind turbine No. 26, which was behind schedule, the result of recent protests.

A crane was lifting a large cubic device; we later learned it housed the electronics that will operate the 80m-tall wind turbine, one of many that are projected to be built in the area.

We then attempted to walk past the construction area and toward the beach beyond, but the men — by then we understood that they were some type of security, as all were equipped with ear pieces and microphones clipped to their shirts, though none wore any identification or insignia — blocked our way.

The area was off-limits, they told us, adding that this was for our safety.

This was in clear violation of a June 4 request by the Forestry Bureau, which had ordered InfraVest take down fences on the road and told it that it could not block access to the beach by local residents, unless the latter were notified seven days in advance and prior to construction.

The Water Resources Agency made a similar request on May 20, saying that roadblocks could cause problems during flooding.

A young protester, a law student at National Taiwan University in Taipei, eventually joined us.

Accompanied by her, we again tried to edge past the security staff. This time around let us through, though they immediately shadowed us.

They followed us wherever we went, all the way to a sandy ridge that overlooks the construction site, smoking their cigarettes, talking into their microphones and constantly staring at the unwelcome visitors through their mirrored sunglasses.

We were on public land, property of the Forestry Bureau.

After a brief conversation with protesters and a US technician overseeing the installation of the equipment, we climbed into a car and left the site. The white shirts had lined up on either side of the car and were looking in on us, threateningly. It felt like we had stepped into a bad Hong Kong action movie.

Later that day, we received a telephone call informing us that local residents were blocking the access road to the same site and were preventing a construction vehicle from entering.

We doubled back to observe the protest.

There were about 30 protesters, while two young women were sitting on the unpaved road in front of the gigantic truck, eating a boxed meal.

A surly female employee of InfraVest loomed over them, while the white shirts, who by then had been joined by equally stern-looking men in gray uniforms, looked on.

One white-shirted, high-strung man, his eyes bloodshot, walked around in a daze. He had evidently chewed too much betel nut.

A handful of police officers arrived at the scene, but did not do much aside from meekly calling on the residents to allow the truck in.

One of the gray uniforms, tall, dark-skinned, was more willing to talk, and let on that the white and gray uniforms were “security” that had been hired by InfraVest.

I asked Jerry, as he called himself, which security company they worked for.

“It’s not a company,” he said, adding that they were “kung fu,” possibly a reference to where they had been recruited.

“You know, for when things get a bit rough,” he said.

According to Jerry, the white shirts were receiving NT$1,600 per day, the uniforms like him NT$2,000, while the “certified” security staff were paid NT$5,000 daily for their pains.

Most, if not all, were not from the area.

“They are simple, you know” Jerry said, pointing to one of the protesters. “They are telling lies [about the project].”

He said that a larger number of white shirts had been called in for the next day, when more protests were expected.

We then approached a Miaoli police officer and asked him whether the private security guards that InfraVest had hired had any authority to request personal identification, film people or deny people free movement outside the construction site, as they had done when we had visited earlier in the day.

The officer confirmed what we already knew: They had absolutely no such right.

By about 5pm, after Wang had made a brief, but tempestuous appearance, the standoff had run its course and the truck had declared defeat.

As the residents celebrated their small victory, we overheard one of the white shirts angrily tell a police officer that if it had been up to him, “I would have run the truck right over the goddamned protesters and would make sure that a wind turbine is built on each of their properties.”

The white shirts were obviously on edge, ready to snap — and they did the next day, on Saturday, during another protest near the site.

Video footage obtained by the Times shows a larger number of white shirts pulling at and dragging protesters away, both near the site and atop the ridge.

Another one repeatedly knees and kicks a female protester on the ground, while others are being pushed against construction vehicles.

A female protester was sent to hospital after being forced to the ground and, she claims, was kicked in the head.

Meanwhile, police at the scene, who were far too few to handle the situation, failed to intervene and simply asked the protesters to clear the area.

One protester is considering pressing charges against the security personnel.

Commenting on Saturday’s clashes, InfraVest said yesterday that the security staff intervened the way they did because they were in fear for the students’ safety.

It added that there was some miscommunication and misunderstanding on the part of the students about the pushing and shoving.