What’s the best way to fight wind turbines? Get sued! 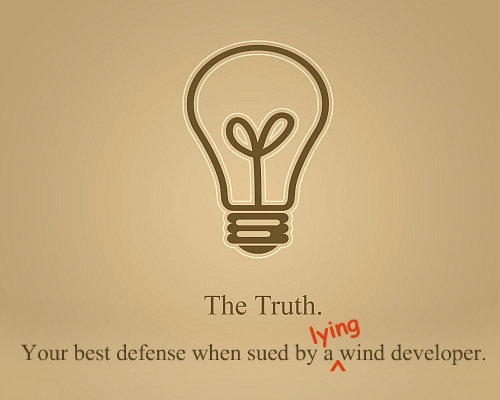 On September 15, 2004, I fell down the rabbit hole into the make-believe world of “wind energy.”  Nine years ago the wind turbine hucksters arrived in Franklin County, NY, oiling their way from townhall to townhall, farmhouse to farmhouse, selling the (palpably absurd) idea of  “clean, green, renewable” wind energy.  (Just another snake-oil, yet spectacularly lucrative.)

For nine years, I’ve been witness to a colossal corporate scam that flourishes despite all the contrary evidence of physics, clinical medicine, economics, environmentalism—and common sense.  Nine years wracking my brain for ways to vanquish it.

We tried publishing Nina’s book, “Wind Turbine Syndrome:  A Report on a Natural Experiment,” thinking (not unreasonably) that 300 pages of clinical and scientific evidence would shut it down.  We were naive.  Zealots driven by dollar bills and the magical thinking of “clean energy” countered with a tsunami of junk science in various junk formats—and, horrifically, it worked.  (Never underestimate the ingenuity of corrupt fools, especially the ones with PhD’s.)

I debated the merits of suing wind companies.  Nope, that was a non-starter.  I pondered the likelihood of convincing local governments to reject these useless grotesqueries marching across the landscape.  This had mixed results.

Finally, despite knowing better, I confess I hoped federal governments—browbeaten by the Corporate Green lobby—would get a grip, do the arithmetic, and pull the plug on the massive subsidies.

Meanwhile, the heart-wrenching stories of Wind Turbine Syndrome multiplied.  This website is loaded with them.  From virtually every continent and both hemispheres.  The stories are a carbon copy of one another; the script is identical for all of them.  I keep posting them, though I’m not convinced it does much good:  How many hundreds of identical stories does it require to stop this nightmare?  The answer is becoming increasingly obvious:  “Mr. Martin, the number of WTS casualties is irrelevant.” 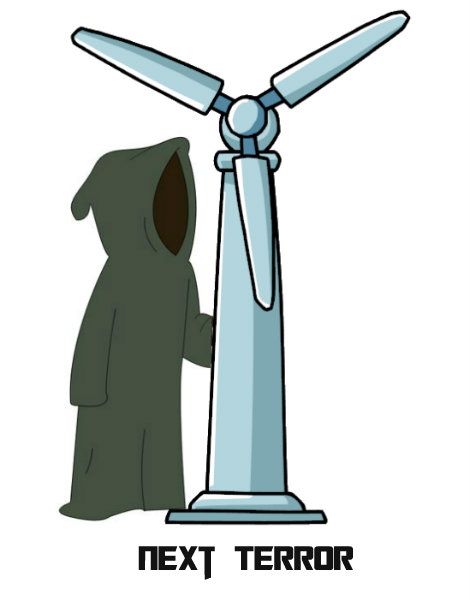 Then—a breakthrough.  A lawsuit.  In Ontario, Canada.  Triggered by this woman. 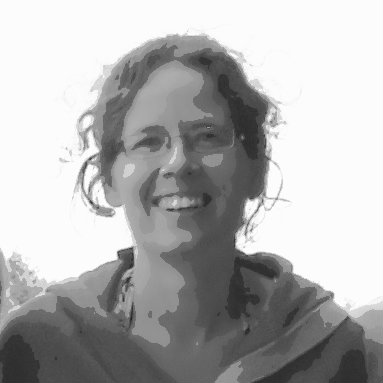 Her name is Esther Wrightman.  (Remember the name.  It’s going down in Canadian history under the heading, “Heroes.”)  Esther is to wind energy what Rosa Parks was to the American Civil Rights movement.  (Rosa had the common sense and courage to refuse to give up her seat on the bus to a white guy.  Rosa understood truth and integrity and fairness—and the American Constitution.)

I’ll go a step further.  Esther is to wind energy what Dr. Martin Luther King was to the Civil Rights movement.  King became a leader when there was a huge injustice crying out for a leader.  He was jailed and reviled for non-violent disobedience.  In his now famous letter from the Birmingham jail, King outlined his agenda:

The purpose of our direct action program is to create a situation so crisis-packed that it will inevitably open the door to negotiation. . . . Indeed, this is the very purpose of direct action. . . . It seeks so to dramatize the issue that it can no longer be ignored. . . .My citing the creation of tension as part of the work of the nonviolent resister may sound rather shocking.  But I must confess that I am not afraid of the word “tension.” I have earnestly opposed violent tension, but there is a type of constructive, nonviolent tension which is necessary for growth.

Notice the line:  “It seeks so to dramatize the issue that it can no longer be ignored!”  Enter Esther Wrightman.  A mom.  A wife who runs the family (plant) nursery.

Esther’s not a lawyer, not a physician, not a PhD.  Her credentials are more “grounded” than this.  Esther’s someone who can distinguish a purple martin from a swift or a bobolink.  (See if a wind company CEO can do the same!)  She can also tell a bog orchid from a begonia.  With her naturalist’s eye, she’s especially adept at distinguishing corporate fraud, harm, and bullshit from garden-variety common sense and truth.

Esther the gardener has decided it’s time to “weed out” NextEra from rural Ontario.  Paraphrasing Martin Luther King, above, Ms. Wrightman has resolved to so dramatize the issue of wind energy “terrorism” that it can no longer be ignored. 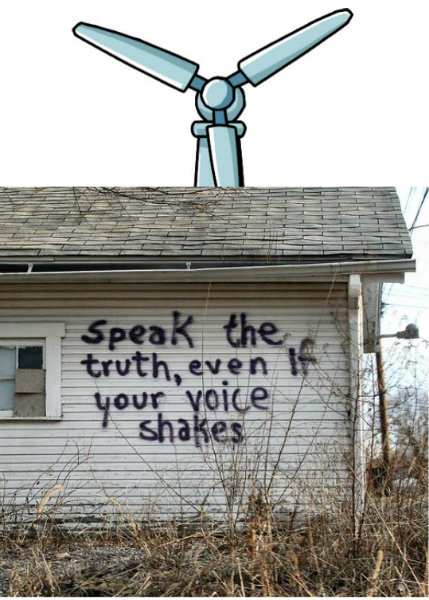 “NextEra,” she has publicly and loudly declared, is misnamed.  “More truthfully, it is Next Terror!”  Brilliant!  Succinct.  Snappy.  And true.

For this, ham-handed NextEra sued her.  (Click here for the entire suit.) 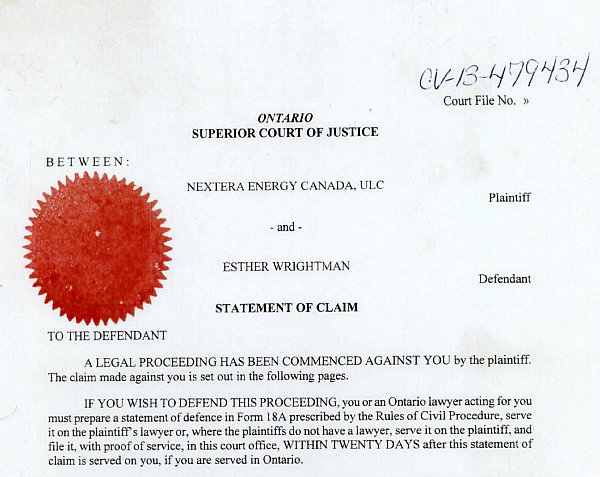 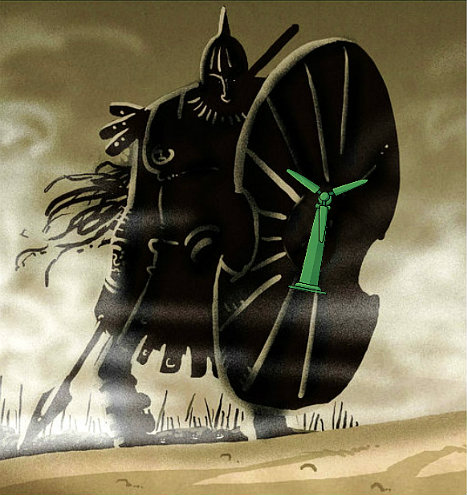 Remember the biblical David and Goliath?  Bellowing Goliath, reincarnated as a 500′-tall giant industrial wind turbine, has swung round and fixed its bewildered gaze on the mere wisp of a girl standing before it—all 5′, 100 pounds of her.

Perhaps “Joan of Arc” would be a more apt name than “David.” 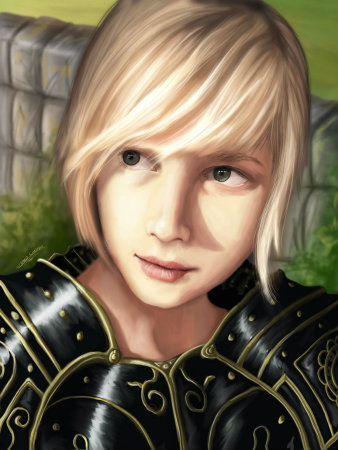 In her formal reply to NextEra’s legal bullshit, Esther filed the following “intent to defend” with the Ontario Superior Court.  (Click here for the entire document).

Through it’s own means, [NextEra] discredited its own business in the ways and means it dealt with the public, and earned the name “NextError” and “NexTerror” through these actions.  These include . . . [whereupon follows a long list of evidence].

Whoa!  This is unprecedented!  Improbable as all hell!  And—brilliant. 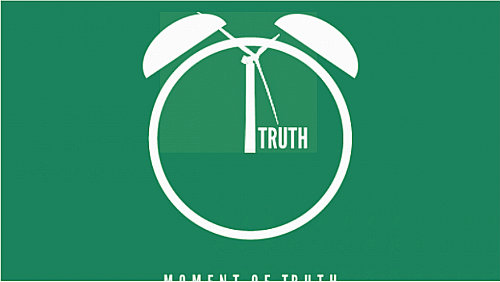 Ladies and gentlemen, I believe Esther Wrightman has shown us the way forward.  The moment of truth:  Publicly accuse the wind developers of being terrorists and bullies and liars, and invite them to sue you.  Then, make them defend their lies, terrorism, and bullying in court and—best of all—before the media who will stampede you for a juicy story.  (Yeah, it helps if you’re a 5′ tall, 100 lb. young mom with zero financial assets.) 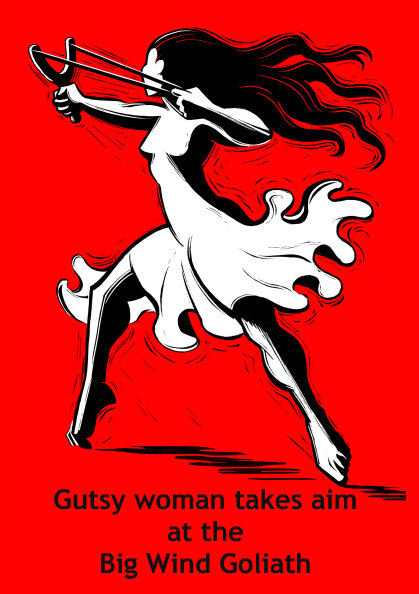 .
Don’t use a lawyer.  Keep it cheap.  Let Goliath hire the blue-stocking Toronto law firm with its $500/hour “fee” meter running.  (Of course, Goliath writes it all off as a tax credit.)

Go for the jugular:  Ask the court for subpoena powers—to get Goliath’s records.  Go after emails and other correspondence.  Find the government/industry corruption, the sleaze, the broken laws.

Call expert witnesses, including Dr. Pierpont, Dr. Laurie, Dr. Salt, Dr. Hanning, Dr. Nissenbaum, Dr. Swinbanks.  And noise engineers:  Rick James, Rob Rand, and their counterparts in Australia and the UK and Canada.  And professional property assessors, like Mike McCann (Chicago).  And wildlife biologists, like Jim Wiegand.  I can say with confidence that Dr. Pierpont, at least, would waive her (normally large) “expert witness” fee and testify pro bono.  (Her fee is large because of the hundreds of hours required to prepare her testimony.  In this instance, she will do it—free.)

In sum:  Get sued!  Keep it cheap, keep it true, keep it honest.  And hammer the sons of bitches in court.  Most of all, create a media spectacle—at the wind company’s expense.

And if the court decides against you—you still win the moral argument, and you win zillions of onlookers who are drawn to the huge spotlight you are shining on these terrorists.  And when you’re hauled off to prison for a (brief) period of time, because you can’t pay the fine—you win even bigger!  Dr. King, Nelson Mandela, Henry David Thoreau—all did jail time to drive home the justice of their cause.  (Get used to the idea of wearing an orange jumpsuit for a week or two. Bring along some good books.  I recommend Thoreau’s classic essay,  “On the Duty of Civil Disobedience.”) 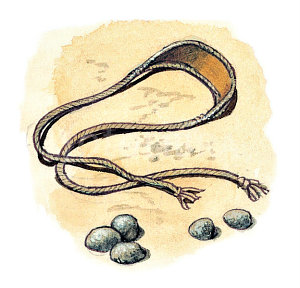