The end of (bullshit) wind energy is in sight! Hurrah! 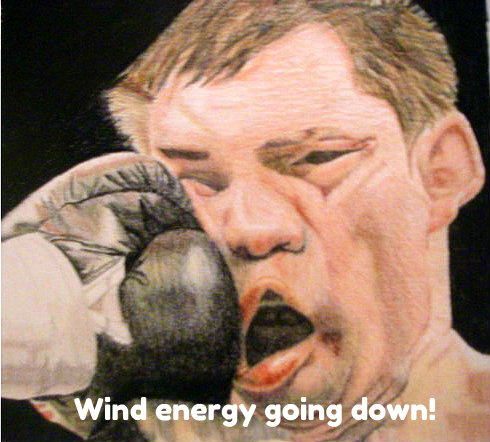 .
Seven years ago, pulled along by huskies, David Cameron visited a Norwegian glacier. Vote blue, he implored, and go green. One year later Kevin Rudd became Prime Minister of Australia after identifying climate change as the “greatest moral challenge of our time”. Climate change campaigners interpreted his victory as one of seismic importance and governments across Europe rushed to pour money into the renewable energy sector. Then in 2008 along came Barack Obama. The wicked George W. Bush was replaced with a president who promised to stop global warming. Hurrah!

And, for a period, Mr Obama seemed determined to deliver. Here, after all, was the president, some would have us believe, who could walk on water. One year into his blessed reign he was awarded the Nobel Peace Prize without having secured peace in any part of the world. He was top of the pops in global opinion surveys. Just about every world leader wanted to be photographed alongside him.

Super-Obama’s great opportunity to save the planet came in 2009 at the Copenhagen climate change summit. He was at the height of his political powers. His Democratic party controlled all of Washington: the presidency, the House of Representatives and the Senate. And yet Copenhagen ended in the same way as almost every other climate change summit of recent times: in failure. Having failed to persuade members of his own party to cut greenhouse gas emissions, Mr Obama also failed to persuade the governments of New Delhi, Beijing and Brasília.

The writing may have been on the wall in 2009, but the green movement has soldiered on. Theirs, they believed, was a moral mission of such importance that nothing would or should get in their way. Whatever the economic, social or political price they were determined to succeed. The doubts of sceptics like me could always be ignored, but when the politicians who once championed green politics are in retreat it is perhaps time for even ecological diehards to get real.

And in the past ten days one of the greenest of green politicians has to all intents, constructions and purposes given up. Last week Australia’s green movement suffered a defeat at least as big as those of the country’s cricket and rugby teams. Mr Rudd announced that he would ditch the carbon tax that had threatened to consign his Labor Party to one of the worst defeats in its history.

All over the world green politicians are presiding over similar climbdowns. From Washington to London, shale gas rather than any renewable technology is seen as the future. Even nations such as Germany and Spain, which led the march to green energy, are slashing unaffordable subsidies to the renewables industry. Lord Lawson of Blaby has claimed that the average share price of companies in the renewable sector has fallen by 80 per cent over five years. “One renewable company after another is going bankrupt,” he declared.

The heavy cost of green energy policies might have been justifiable if they had delivered results, but they haven’t. Since the Kyoto treaty on climate change, global emissions have continued to rise. Since 1990 they have increased by about 50 per cent. China’s increase in emissions has been 25 times greater than the reduction by the EU’s core nations. In so far as Europe has actually met its environmental obligations it has only done so by exporting industrial capacity (and jobs). Once the environmental impact of imported goods has been added to its carbon footprint Europe has clearly failed to keep its environmental promises.

One commentator, Bjørn Lomborg, spelt out the futility of Europe’s unilateral environmentalism. Germany’s efforts to combat climate change might, he calculated, just possibly delay a rise in global temperatures by 37 hours, but that delay will have cost German taxpayers and consumers more than $100 billion in the form of renewable subsidies and higher electricity costs. That’s about $3 billion an hour.

Green enthusiasts are kidding themselves if they blame the global economic slump for the failure of climate change policies. Their policies were always an attempt to defy economic gravity. No half-decent politician in any part of the developing world was ever going to delay economic progress by embracing expensive energy sources. Any policies that prevent a clinic in India from being able to refrigerate medicines or a student in China from being able to read at night were always destined to fail.

I am not one of those people who deny that the climate might be changing. I don’t feel qualified to question the majority of scientists who insist that warming is both real and man-made. My objection to global warming policies is more practical. They aren’t succeeding in cutting emissions and they aren’t going to succeed until so-called clean energy is similar in cost to conventional energy. Until then — and we should be investing in green technologies in the meantime — the demands of millions of wealthy green campaigners will continue to be overwhelmed by the demand from billions of poor people for economic growth and the social justice that it affords them.

Two decades of green policies haven’t just failed to stop global warming. Old age pensioners in Britain and in other developed countries have been forced to bear electricity bills inflated by renewable subsidies. Blue-collar workers have lost their jobs as energy-intensive manufacturing companies have relocated overseas. Beautiful landscapes have been ruined by bird-chopping wind turbines.

There have also been huge opportunity costs. What could world leaders have achieved if they hadn’t spent the past 25 years investing so much money and summitry on global warming? In a brilliant book — How to Spend $75 Billion to Make the World a Better Place — Mr Lomborg has documented how politicians could have been tackling more pressing problems facing the world’s poorest people. Action on HIV/Aids, for example, the provision of micro nutrients to hungry children, the control of malaria, guarantees of clean water and the liberalisation of trade would all have been better uses of politicians’ time and taxpayers’ money.

Many of Britain’s politicians — notably the Chancellor, George Osborne — know all of this. But outside of last week’s welcome but overdue encouragement of fracking, Britain’s statute book is still creaking under the weight of yesteryear’s laws and their commitments to invest in expensive green energies. Until those laws are repealed British businesses and consumers will be paying a very high price for no earthly benefit.

“The cash wasted on failed global warming policies would be better spent on tackling the problems faced by the poor” Couldn’t agree more. If we are doomed as a species, like all dominant species in the past, then so be it. It is vain to try to stop the inevitable and, let’s be honest, we aren’t that worth saving of all the species on the planet.

This is hilarious. We’ve been berating the evil Chinese for their lack of green policies for years. They have been ignoring us and ploughing on with expansion, quite rightly. And now we need a bit of economic growth we are doing a complete about turn. Cracks me up.

The problem is not the futility of green policies,but the sheer power of the industrial forces we have unleashed. It was not so bad when only Manchester and a few other places existed,and we could glory in our achievements and mock those who did not like getting their hands dirty, but the price paid in death and destruction of the environment convinced even the most die hard we were better off without it.

Some years ago I met a former Hungarian communist diplomat who knew more about our industrial history than most Brits. She said. We Were The First We made all the mistakes.And others Learned From Our Mistakes. Alas that last part was not true and the mistakes are being repeated on an ever vaster and more damaging scale.

About time anyone with an ounce of common sense has been saying this for years, it was a reckless misuse of resources when we needed common sense not wishful thinking, are well some people made a fortune out of one of the biggest cons in human history.

Cracks are already starting within the green movement. The greens in Germany are supporting the building of new coal fired power stations required because they insisted nuclear be shut down. Even though they have spent enough to generate around 25% of their energy needs from renewables, they still need backup always available power from these new stations in case the wind does’t blow.