Family sues Board of Health over Wind Turbine Syndrome (Mass.) 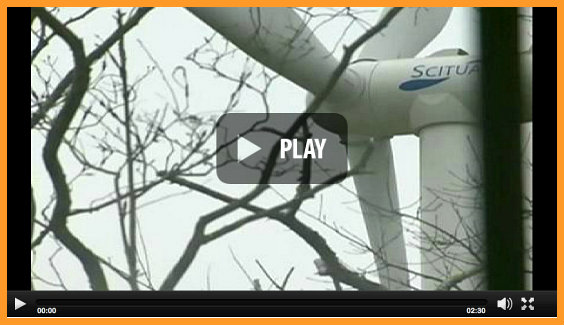 Mark and Lauren McKeever Friday asked a Plymouth Superior Court for a temporary restraining order against Scituate to halt operations of a giant wind turbine 640 feet from their house.

With three blades each 150 feet long, the turbine runs intermittently throughout the day and night.

“We can’t sleep, my children wake up in the middle of the night because of the noise and humming, and then they go to school where they can’t concentrate because they are sleep deprived,” said Mark McKeever.

He said his family is suffering from sleep disturbances, headaches, nausea, dizziness, extreme fatigue, anxiety, tinnitus and difficulty concentrating since the turbine was erected over their house last March.

On sunny afternoons, light flickers throughout their house and makes it impossible to stay in the house or even to do any yard work.

Mark McKeever said his family had two good weeks of sleep in recent months — when they went to New Hampshire for vacation.

“What they are doing is wrong,” said Mark McKeever, who has pleaded with the town’s board of health to at least shut the turbine down at night.

But town officials have been told by operators of the turbine that one-third of the wind generated is produced at night.

Town officials have said there is no proof that the turbine is causing the McKeevers’ health problems.

Mark McKeever said he has invited every official to come to his house and see for themselves, but none have shown up to date.

He is suing the members of the Board of Health for their refusal to act on his request for relief.