“We, the people of the Netherlands, are asking for support” (Petition) 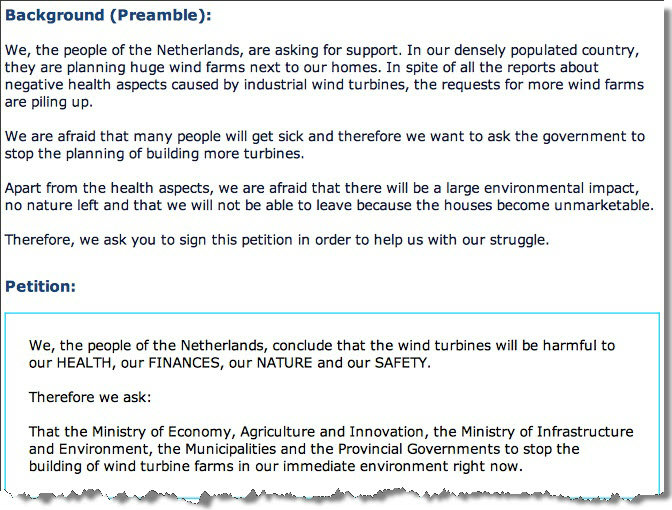 Something awfull is happening in Holland. Landowners and the wind industry have made plans to built wind farms on every available piece of land in the north of Holland.

I always thought wind energy was green energy, but this is far from the truth. After a year of reading reports from people who are living in the vicinity of wind turbines, and technical reports from acousticians, I have come to understand that wind farms are destroying the health of the people living close by. This is probably due to the fact that wind turbines generate low frequent noise and Infrasound. And this is very harmful for humans and animals. (See the documentary, “Pandora’s Pinwheels.”)

But, because there is so much money involved (subsidies), the wind industry and governments are not willing to look at the negative health aspects.

In Holland we are going to offer a petition to the government, to make them AWARE of what is really happening.

At the same time we have an international petition online to ask for support from abroad.

If you feel you would like to give us your support, then please sign this petition and send it on to as many people as possible.

Thank you very much!