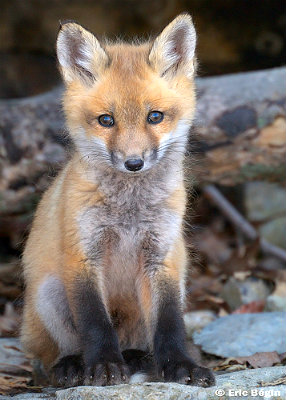 (With thanks to Eric Bégin)

What did the fox pup cry as it was struck by the motorist in the  night?  And did the driver of that machinery of convenience think to  stop, kneel and watch the green fire go out of its eyes, I wonder?

Where do the fires of wildness go, and might they ever enter our  calculations of necessity?

Questions we seem loath to answer.

Death in this manner is unavoidable in this murderous place.  This is  the horror: the pitiless logic of atrocious acts.  Evil is most  monstrous when most banal—when they say it cannot be helped.  What  kind of dream is this civilization that makes us think so?  Is man no  longer sapient?

The cry it gave in death I imagine was but a universal plea for  comfort.  Surely our kind can will the mind into that fuller realm of  compassion embracing both earth and our uncomprehended selves.

I  learned this when I heard, I swear it, the voice of fox come round  again that morning.  When I heard “We must stop,” quietly, decisively,  from the physician who says children most resemble animals.   And we did.

I watched her lift the limp smashed body from off the burning road to  lay it by the river.  There singing, she did, of beauty and trotting  and sniffing for mice and moles.  There to ask the keeper of foxes to  rekindle the fire in yet another furnace of fox persuasion.  There to  leave tobacco with a softly furred trotter whose keeper I too must  surely be.

Ceremony of infinite innocence. “I can be a frog or a fox  and still be a person,” someone who knew creation’s etiquette once  said.   So obvious, so unavoidable.

Compassion.  Surely this is what the earth seeks most in us, the  very thing we crave ourselves.

Somewhere in man’s primordial darkness  away beyond intelligent grasp the shapeshifter arises consoled,  requickened by the voice of the truly great physician.