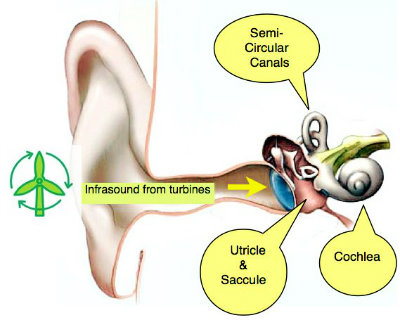 With two new wind farms proposed for our region and another already in operation, evaluating potential health impacts is important.

A survey was conducted on wind farm noise as part of a Master’s dissertation by Zhenhua Wang, a graduate student in Geography, Environment and Population at the University of Adelaide, Australia.  The results show that 70% of respondents living up to 5 kilometers away report being negatively affected by wind turbine noise, with more than 50% of them “very or moderately negatively affected.”  This is considerably higher than what was found in previous studies conducted in Europe.

The survey was made in the vicinity of the Waterloo wind farm, South Australia, which is composed of 37 Vestas V90 3 MW turbines stretching over 18 km.  These mega turbines are reported to be emitting more low frequency noise (LFN) than smaller models, and this causes more people to be affected, and over greater distances, by the usual symptoms of the Wind Turbine Syndrome (WTS): insomnia, headaches, nausea, stress, poor ability to concentrate, irritability, etc., leading to poorer health and a reduced immunity to illness.

The wind industry has consistently downplayed concerns over health issues, disputing findings such as those made by Dr. Nina Pierpont in her book and peer-reviewed report, Wind Turbine Syndrome.  Dr. Pierpont received her medical degree from Johns Hopkins University and holds a PhD from Princeton University.

However, some jurisdictions are enacting regulations to protect residents as evidence mounts to suggest negative health impacts are a dark side of going green through wind energy.

The Danish government recognized recently that LFN is an aggravating component in the noise that affects wind farm neighbors.  This prompted their issuing regulations that limit low-frequency noise levels inside homes to 20 dB(A).  Unfortunately, as denounced by Professor Henrik Møller, they manipulated the calculation parameters so as to allow LFN inside homes to actually reach 30 dB(A) in 30% of cases.  “Hardly anyone would accept 30 dB(A) in their homes at night”, wrote the professor last month.

A summary of the Australian survey has been published, but the full Masters dissertation has not been made available to the public.  In the interest of public health, the European Platform against Windfarms (EPAW) and the North-American Platform against Windpower (NA-PAW), have asked the University of Adelaide to release this important document.

A neighbor of the Waterloo wind farm, Mr Andreas Marciniak, wrote to a local newspaper last week:  “Do you think it’s funny that at my age I had to move to Adelaide into my Mother’s shed and my brother had to move to Hamilton into a caravan with no water or electricity?”  Both Mr Marciniak and his brother have been advised by their treating doctors, including a cardiologist, to leave their homes and not return when the wind turbines are turning.

How many people will be forced to abandon their homes before governments pay attention, wonder the thousands of wind farm victims represented by EPAW and NAPAW.  “It’ll take time to gather enough money for a big lawsuit,” says Sherri Lange, of NAPAW. “But time is on our side: victim numbers are increasing steadily.”