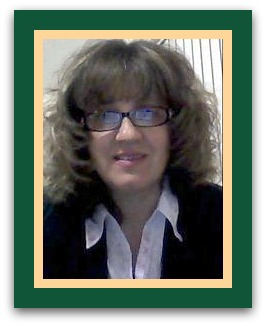 ·
—Brendan Gullifer, The Courier (8/18/11)  (The images used throughout this posting were supplied by WTS.com—Editor.)

·
A local doctor has spoken out publicly for the first time after treating patients for symptoms associated with living near wind turbines.

Dr Andja Mitric-Andjic, who practises in Daylesford, said she had treated at least two local patients for sleep deprivation, and spoken with others living near the Hepburn wind farm.

Dr Mitric-Andjic, who lives at Korweinguboora, said she, her husband and14-year-old son had also suffered sleep interruption since the turbines began operating.

Dr Mitric-Andjic said she decided to speak out because the problems being experienced by local residents could not be ignored.

“Wind farm, what do you mean wind farm?” she said.

“This is industrial. No one is against green energy. Everyone would say yes, of course, but put it out of residential areas.”

Dr Mitric-Andjic, 49, practises at Springs Medical Centre. She and her husband bought land on the Ballan-Daylesford Road seven years ago and built a house there last year.

She said patients had come to see her to complain about the noise from the two local turbines.

“They can’t sleep and in the morning they wake up exhausted. They can’t function. They have poor concentration, probably because of poor sleeping.” 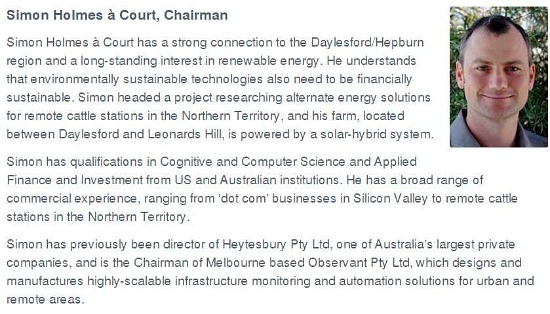 “As a community organisation, we’re very concerned about the well-being of our community,” Mr Holmes à Court said.

“If anyone is concerned that the turbines are harming them, we want to meet to understand their claims. Our project officer lives in Leonards Hill and is in frequent contact with the community around the wind farm.”

Mr Liversidge said he had been doing his own noise monitoring, by parking his car on the road and listening.

“Anybody can come and listen for themselves,” he said. “I don’t believe there’s any problems whatsoever.” 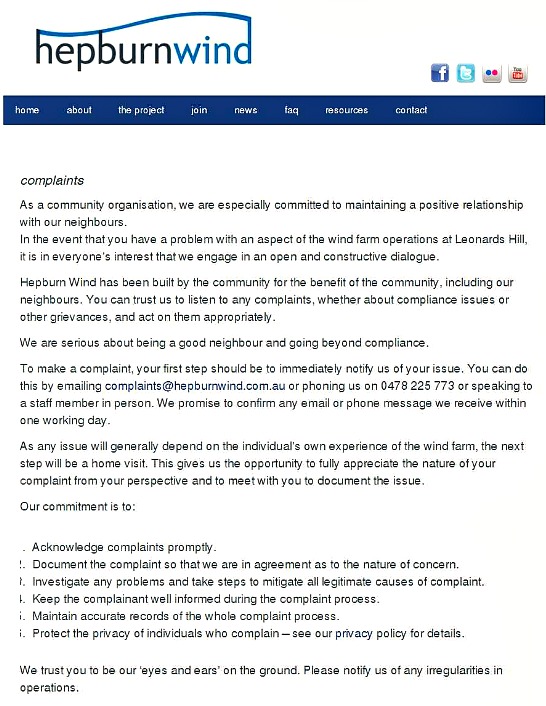 ·
Editor’s comment:  Now for some real transparency in this whole sordid tale.  The following rebuttal was written by Sarah Laurie, MD, Medical Director of the Waubra Foundation (Australia).  Read her response to the “Hepburn Wind” crowd and see if you don’t agree that Hepburn’s “Complaint” process is nothing more than posturing and rhetoric (i.e., bullshit). 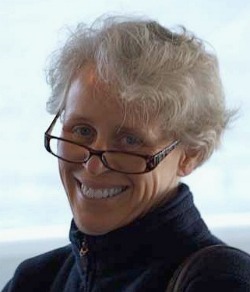 Hepburn Wind Chairman Mr Simon Holmes à Court was warned this was the inevitable consequence of locating turbines too close to homes in October 2010, before the turbines were constructed. I wrote to him informing him of this by email on 18th October, 2010 and was subsequently interviewed by a local journalist, who quoted a representative from Hepburn Wind saying that they were confident there would be no problems, “as there were plenty of studies showing there were no problems” and they had no intention of waiting until independent health studies were completed.

Hepburn wind representatives and directors cannot say they were unaware of the issues, and the possibility that their turbines might have this effect, because of where they were sited. They chose to ignore that advice at their peril, and have instead chosen to “shoot the messenger”.

Unfortunately, when I met with Mr Holmes à Court earlier this year, to plead with him to delay starting the turbines until a health study had been done, he admitted he had not read Dr Pierpont’s study, and proceeded to accuse me of scaremongering, both in a private meeting with him and publicly in the oral evidence he gave to the Australian Federal Senate Inquiry into Rural Wind Farms (Melbourne hearing 29/3/11, p. 54 onwards).

This conveniently ignores the fact that problems with wind turbines in Australia were being publicly reported well before I became aware of the problem in July 2010. For example, Dr David Iser was an Australian GP who documented cases in Toora in 2004 and notifed health authorities and the then government, but he was ignored. Trish Godfrey, the Waubra resident, had publicly discussed her problems on a number of occasions, well before July 2010.

We now have the dangerous situation of an Australian Federal Government hell-bent on implementation of a technology which is causing serious harm to health around the globe when it is sited inappropriately, yet no action has yet been taken on the findings of their own Federal Senate Inquiry, which recommended urgent research to investigate this problem. It’s full steam ahead, reminiscent of the Titanic…

The same government is using buckets of taxpayers’ money to advertise this new government policy, featuring Hepburn Wind in it’s advertisements for its government policies, while at the same time this well-intentioned “community-owned” (actually, it is shareholder-owned) wind development is driving people out of their homes of 30 years. And there are apparently 50 more such “community” wind developments planned across the country by Mr Holmes à Court and his colleagues. One can only hope that the others are more appropriately sited, based on good independent scientific study, not yet done, or a very conservative setback buffer. Why are they not apparently listening to the National Health and Medical Research Council’s own advice to adopt a “precautionary approach”?

No amount of well-intentioned wishful thinking on the part of the directors and investors in these community wind development initiatives will protect nearby residents from the deleterious effects of physical forces such as sound waves, particularly the extremely low frequency sound waves emitted by wind turbines, both airborne and seismic, and which are uniquely disturbing, and uniquely penetrating.

It is high time that Mr Holmes à Court and all the other directors of Hepburn wind faced up to their legal responsibilities as company directors, and took those responsibilities seriously, and did their due diligence with respect to the adverse health effects of these wind turbines. They need to ensure that the acoustics advisers they are using are indeed doing their job properly.

Already, after a very short time operating under the company Hepburn Wind, the turbines are causing harm to health, and have had a devastating impact particularly on one family living 500 metres away, with two of the family members being so severely impacted that they have had to move out, or go away, to get relief from the symptoms and problems they are experiencing.

ALL PREDICTABLE. And ALL PREVENTABLE with the safe siting of turbines, well away from homes.

We know from the Falmouth, Massachusetts (USA) experience, that just one turbine is enough to cause serious harm to human health, from the case reports of serious consequences for neighbouring residents, and visitors (including acoustician Rob Rand).

THE TIME FOR DENIAL OF SERIOUS HARMFUL EFFECTS OF THESE TURBINES IS OVER.

IF THEY ARE CONSTRUCTED BEFORE THE NECESSARY INDEPENDENT ACOUSTICS AND HEALTH STUDIES ARE DONE, THEY MUST BE CONSTRUCTED WELL AWAY FROM HUMAN HABITATION.

IN AUSTRALIA, THE LIMITS OF CURRENT REPORTS OF SYMPTOMS DIRECTLY ATTRIBUTABLE TO WIND TURBINES OPERATING (highly characteristic body vibrations and the nighttime waking in a panicked state with prolonged difficulty getting back to sleep) is 10 kilometres, which is why our Explicit Cautionary Notice has given this distance as the necessary buffer, based on current knowledge. As turbines increase in size and power generating capacity, this may well need to increase, because of the increase in low frequency sound generated (see Moller & Pedersen’s recent paper).