Editor’s comment:  “Timothy Chase lives in Chateaugay in a house with big fat liens on it. And I warn you right now this is going to be a sad story and if you don’t like sad stories stop reading right now.”  So we began a story uncannily similar to this one, in March 2009.  Up here in the North Country of New York State.  We titled it, “Liens R Us.”

Read it and compare it to this, below, and ask yourself some hard questions about these bozos who call themselves wind developers. 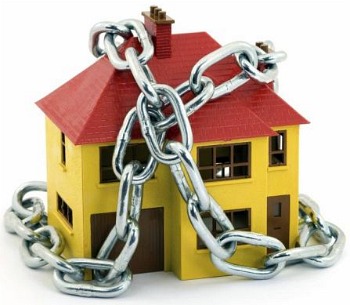 They’re a colossal sight—towering metal giants with blades as long as airplane wings humming in the rural fields of Central New York.

But for residents in Fairfield who already felt they’d been deprived of a fair say in construction, the windmills are nothing but an expensive, loud nuisance.

“We should have been able to vote on them,” said resident Carol Riesel. “We were never made aware until the deal was almost done—it’s makes me so angry. No one had a voice in this—the board members listened and looked and moved on to the next business.”

And so it was, that through the summer and fall of 2010, Iberdrola Renewables constructed the Hardscrabble Wind Farm.

Now, Riesel, who lives at 797 Davis Road, and other residents say the giant windmills are nuisance to their community.

Riesel said many of the town residents are in agreement that windmills are ugly, scary and loud.

“It interferes with my life,” she said. “Now the beautiful landscape is gone. They’re 500 feet tall!  And to live underneath them is unbelievable. They’re within 1,000 feet of my property and I hate them. My anxiety is sky-high.”

Nearby, neighbor Monique Consolazio said from her home at 1183 State Route 170, the effects of the windmills—particularly one that stares into her kitchen window, dubbed Turbine 33—are ‘maddening.’

“It’s like living in an insane discotheque,” Consolazio said. “When the sun hits the blades at a certain angle, you get a strobe-light effect. And the blades throw their black shadows across the house, the field, everything, while the strobe light effect is going on.”

That’s hard for Consolazio, who said she moved to Fairfield nearly 18 years ago, after she was widowed, to live a simple life. Now, she said, she can’t even watch basic television. Her TV is in constant pixilation, which is so annoying that half the time, she shuts it off and doesn’t bother to watch. And the noise is like listening to the highest volume of ‘an old-time coffee grinder,’ she added, making a noise that signified the sound: ‘GRIND! SWISH! GRIND! SWISH!’

“I was told by a representative (of Iberdrola) that they were sorry about that, and what I should do is do the same thing they did in World War II—get shades and black out my windows,” she said in disbelief.

A red blinking light atop each tower shows itself to air traffic, but Consolazio said the company never put the promised ‘sleeve’ over it so it wouldn’t bother land dwellers.

“No one’s taken responsibility for that,” she said.

Iberdrola spokesman, Paul Copleman, indicated in a statement that the company was well-aware of the issues raised by concerned Fairfield and Little Falls Citizens about the windmills.

We are working closely with landowners who have raised concerns and are actively investigating those that have been brought to our attention. This includes meeting directly with landowners, engaging in additional studies, and assessing some mitigation measures. We will of course honor our obligations to the landowners and the community.

With regard to sound, we modeled the project to be in compliance with local ordinances, and our permits with Norway and Fairfield govern sound levels. As a response to some of the concerns raised, we will be engaging in additional sound measurements.

With regard to shadow, we analyzed shadow during the development phase, as this is a phenomenon which is predictably modeled given turbine placement and the movement of the sun during the year. Our analysis was presented as part of the project environmental impact statement and is available here.

We designed our final turbine layout to minimize the duration of shadow flicker, and its occurrence, assuming it is sunny, should be limited during the day, and in no case will a home experience this for more than 20-30 hours a year. As you can see in our analysis, this 20-30 hour scenario only applies to two homes, the remainder of those affected will be affected for less than 20 hours per year at maximum.

With regard to television interference, again, we are aware this can happen, and our permits contain language addressing this. We are already working with landowners who have raised this with us to evaluate their circumstances in more detail.

Jim and June Salamone live at 820 Davis Road. They have for many years.

Jim said he and his wife were shocked and angered when last Wednesday, April 6, they received a certified letter in the mail from Saunders Concrete Company indicating they, along with 33 other property owners, had a lien placed on their property. That’s the company that poured the concrete bases that root the windmills to the ground, residents explained to Utica Daily News.

Why legal action against the residents? Saunders Concrete’s attorneys, Gilberti Stinziano Heintz & Smith in Syracuse, did not immediately return messages from UDN, and neither did the company’s Vice President, Tracy Saunders. In the letter, it was indicated that out of a project worth $2,165,304.40, Iberdrola’s contractor, Mortenson Construction, still owed the company $1,946,284.10. The properties listed in the lien notice all had windmills on their property – except, at least, the Salamones.

“It’s gone to the credit bureau—if I wanted to sell my house, I couldn’t,” Jim Salamone said. “And I can’t get a loan. This is what happens when things aren’t done right.”

The Salamones discovered they were listed as participants—that’s someone who hosts a windmill, wires and cables, or other parts of the wind farm project—in 2009 when friend and neighbor Andrew McEvoy noticed his name listed in some documentation.

“If Andy didn’t find it, I never would have known,” Jim Salamone said. “This is what happens though when things aren’t done right.”

From there on out, he added, the Salamones tried nine times in vain to get their name removed from anything that indicated they were participants in the project. For the record, participants are awarded annual “pay” for hosting, they said.

“The landowners didn’t realize what they were signing, they just wanted the money,” Jim Salamone said.

Iberdrola’s Copleman further indicated in the statement that the concrete company, acted rashly, and alongside Mortenson, they were working to remedy the issue.

While we cannot discuss the specifics of the dispute, Iberdrola Renewables has a commitment and obligation to remedy this issue on behalf of the property owners who had a lien placed on their property and are acting to remove the liens as quickly as possible.

While mechanics liens are not uncommon in construction contracts, we believe that Saunders had other avenues available to resolve their dispute with Mortenson, and by pursuing a mechanics lien they have unnecessarily involved the landowners involved in this project as well as several that are not even part of the project.

Iberdrola Renewables is working as quickly as possible to resolve this matter and remove the liens. We have been in contact with the affected landowners and will be working diligently with Mortenson Construction to secure a resolution. Mortenson has started the process of obtaining a bond that will remove the liens from the individual property owners.

The Salamones will likely hire a lawyer, acknowledging how costly it could become, to fight the lien. They’re hoping they can at least be compensated for what they feel turned their lives upside-down.

“How am I going to get this off my credit score?” Jim Salamone asked. “I want it clean again! What happens if they don’t correct this and they go bankrupt? I have nothing to do with this and I’m right in the middle of it.”

And while Iberdrola indicated its company agreed that a lien was a hasty move to make, that doesn’t get them off the hook, Jim Salamone said. Neither does the letter of apology they sent the couple shortly after the lien letter.

“This is bad business,” he said. “They’re not even looking at what they’re doing. And they’ve got so much money they can buy their way out of it. What are we going to do?”