Editor’s note:  The Australian government says it’s conducting a study of wind turbines and human health.  They’re calling it “An Inquiry into the Social & Economic Impact of Rural Wind Farms.”

Yes, it includes a health component.  Supposedly. This is the Committee’s agenda: “The social and economic impacts of rural wind farms, and in particular:

Pierpont was asked to make a submission by the bill’s sponsor, Senator Steve Fielding, Leader of the Family First Party.  The Senator apparently thinks the Senate Committee will consider evidence submitted from people outside Australia.

That’s where the problem lies. 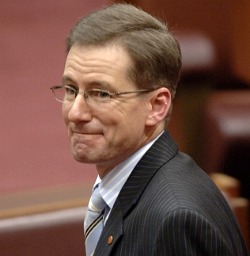 Doubtless Steve Fielding is a nice fellow, and well-meaning and all, but neither he nor his staff (see David Lipshutz, below) seems to grasp that there’s a serious “disconnect” between what Fielding thinks is going on and what this Senate Committee is actually doing.

What it’s actually doing is obstructing the submission of evidence—at least from Dr. Pierpont, the leading researcher on Wind Turbine Syndrome.

The posting, below, is a letter (email) we sent to Fielding’s Senior Policy Advisor, David Lipshutz, explaining that we’re meeting with nothing but stonewalling from the Senate Committee.

We urge you to contact the Senate Committee and Fielding (Lipshutz) and apply pressure.

Now, what do you bet the Senate Committee is quite happy to accept any amount of evidence from wind developers anywhere in the world?

Sound cynical?  You bet.  We’ve been on this merry-go-round for six years, and counting.

·
David, this just came in from—well, from the gal who wrote it.

Further to my email below, please accept my apologies for sending this. Your submission to the committee is still being considered and, as yet, has not been published. You will hear from the committee further on this matter.

First of all, she apologizes for acknowledging receipt of Dr. Pierpont’s submission (click here). In fact, Ms. Warhurst’s email constitutes a retraction of that acknowledgement. “Your submission to the committee is still being considered” and “you will hear from the Committee further on this matter.”

Sounds like Dr. Pierpont’s evidence may not be accepted by the Committee? That there is some debate whether it’s “acceptable”?

David, I must say that I think you’re a tad naïve in this matter; I’m not sure you grasp that Wind Energy is a religion for many people, including people in high government office. (Why religion? Because Big Wind is going to save us from the Apocalypse of Global Warming. Brilliantly simple-minded.)

By the way, the explanation you were fed (below) about the “computer program” not accepting foreign addresses is baloney. It’s a simple matter to change (fix) the program. Laughably simple.

We have had a number of people contact our office in relation to the upcoming wind farm inquiry alerting us to the fact that people overseas are encountering difficulties in posting their submissions to the Senate Inquiry. I understand the problem concerns the requirement to include an address, with the online system only recognising Australian addresses.

I have spoken to one of the staff on the Senate Committee and she has informed me that it is certainly not their intention to exclude overseas submissions, rather it is merely a computer glitch [emphasis added by CLM].

To overcome this computer glitch, those people overseas wishing to post their submission should leave the “State” and “Postcode” details blank [emphasis added by CLM].

Alternatively, should people still encounter difficulties, they may send in their submissions by email to the following address community.affairs.sen@aph.gov.au. Those preferring this option should ensure, that full address details are included.

Should you know anyone overseas who is having difficulties posting their submissions, I would appreciate if you please forward this email on to them.

You should know that, moments ago, I tried logging into the registration site, following the instructions you gave, above: leave the State and Postcode blank. See screenshot 1. After filling out screenshot 1, I clicked Save & Continue. See screenshot 2. Rejected!  (I was willing to put serious money on being rejected.)

Now, you offer that, “alternatively, should people still encounter difficulties, they may send in their submissions by email to the following address community.affairs.sen@aph.gov.au.”

Dr. Nina Pierpont just made an online submission to the Senate Inquiry on the Social and Economic Impact of Rural Wind Farms. I have attached the confirming email from your office.

A word of explanation. In order to register for the online submission, your program required an Australia address. Dr. Pierpont does not have one. So we took the liberty of using Senator Fielding’s office address (see attached PDF), since Senator Fielding is the person who invited Dr. Pierpont to make a submission to the Senate Inquiry. Makes sense, right?

Note that I have copied this email to David Lipshutz, Senator Fielding’s Senior Policy Advisor.

I gather from Di Warhurst’s email, above, that this is not being accepted, either.

David, when do we stop playing games?

I would like to go on record saying:  The Australian Senate Standing Committee on Community Affairs is stonewalling. I’ve witnessed this kind of performance not infrequently in other government agencies worldwide.

David, I think you need to get your boss involved. Yes, Senator Fielding. This is a pretense of “transparency” and “accountability” and “democracy.”

Senator Fielding is leader of the Family First party, correct? Here’s an email I received today from two Americans currently touring wind industrial plants-built-in-people’s-backyards in Australia. (The Americans are from Cape Cod, Massachusetts. They are the principals of a medical consulting firm, and are filmmakers. Yes, making a film of their findings.)

Here are their preliminary findings, on the back of an envelope. (By the way, their trip was coordinated by Dr. Sarah Laurie, a civilian doc. No help from Family First and no help from the much vaunted Australian Senate and its Committee on blah blah blah.)

The ONLY real estate that is selling is the homes that are purchased by the wind energy industry. They have bought only 8 homes of those who have been very vocal in the Waubra area. They pay the going rate and a little bit more. The home owners have to sign a gag order to not say anything negative about the wind developer. There are for sale signs all over the area in Waubra. No one can sell, is what we were told.

The wind developers only bought from the most vocal people when their properties are relatively cheap. There are landowners with vast amounts of land. If they want to sell, the wind developer will not buy them out, as the cost is greater. Most do not want to relocate. They love it in Waubra, just like we love the Cape and you love where you live. It was beautiful land, quiet and peaceful, but not now. Every place you look there are wind turbines turning turning turning and red flashing lights at night one hour before sunset until one hour after sunrise—128 of them. They are even constructed so close to roads that you will not believe it.

Once the realtors tell people the property is near even a proposed wind ‘farm’…power plant, people do not want to look at the property—is what those close to Waubra told us.

The stories are heartbreaking.

Preston and I were speaking this morning about writing some preliminary findings based on the interviews we conducted. We intend to email this to everyone within the week. When we return and edit the film more will follow. Everyone needs to know now what we have heard.

The fine people of Waubra are even feeling the adverse health effects 10 km from the turbines.

David, why is this information not being presented, in this detail, in this tone, with this urgency, to the Australian Senate? Why is it not being widely reported in the newspapers (which, in fact, barely explore these issues, referring to them as “concerns” and “alleged health effects” and other weenie language)? One of the few exceptions is Brendan Gullifer. There are others, especially in Australian television news media. But, as far as I can tell, all together it’s merely a handful. A handful of heroes and heroines.

Lastly, what are the odds that Dr. Pierpont’s contribution to this Senate debate is a charade?

The Committee is concerned that the significance of ‘Wind Turbine Syndrome’ is being unnecessarily exaggerated because Dr Pierpont is a medical doctor and has published a book on the issue, rather than any scientific merit of such a syndrome. As a result, a degree of fear is being instilled in communities that may host wind turbines. The Committee is concerned that, based on evidence received, this unwarranted fear may be causing greater health impacts than the presence of any actual ‘Wind Turbine Syndrome’ (p. 121).

Where’s this from? It’s from a report produced by the government of New South Wales. Legislative Council, General Purpose Standing Committee No.5. “Inquiry into Rural Windfarms.” December 16, 2009. (Click here.)

Let me rephrase this, since it’s a real gem: These politicians basically accuse Pierpont of inventing WTS and foisting this (illusory) terror on the world.

Welcome to Australia! Hence, my question: What are the odds Pierpont’s contribution to this debate is a farce?

One final question: Why are all those stories, hotlinked above, all over my website and not all over Steve Fielding’s? Family First, after all. (Remember, I live in northern New York State, USA. But, yes, they are all over our website, which is read around the world.)

Just to bring this into tighter focus: Why are your stories all over my website and not all over yours?