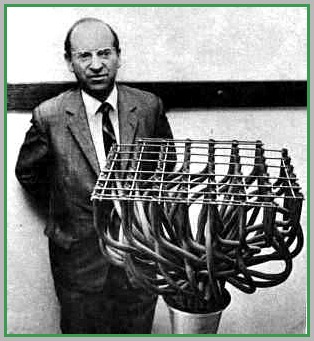 The following video is worth watching.  (Ignore the annoying 15 sec. ad at the beginning.)  It gives you an appreciation for why people get seriously sick when they’re around wind turbines.

The video is a dramatization of work done in France in the 1960s by an electrical engineer named Vladimir Gavreau, who stumbled upon “infrasound” in his laboratory, and, once he recognized its formidable properties for causing debilitating illness, began developing an “infrasound” weapon for military use.  (It’s unclear how far Gavreau’s “weapon” progressed, in terms of further development and use.  Yes, it’s well known that infrasound is used as a weapon; what’s unclear to me is how much of the current technology was pioneered by Gavreau.)

Be that as it may, notice the symptoms experienced by Gavreau and his assistants.  Their symptoms are the result of vestibular dys-regulation—the saccule and utricle (inner ear organs of balance, motion, and position “sense”) sending misinformation to the brain.  A phenomenon described perfectly and explained pathophysiologically half a century later by Dr. Pierpont in her book, “Wind Turbine Syndrome:  A report on a natural experiment.”

“Luckily,” wrote Gavreau in his journal, “we were able to turn it off quickly.  All of us were sick for hours.  Everything in us was vibrating:  stomach, heart, lungs.  All the people in the other laboratories were sick, too.  They were very angry with us.”
. 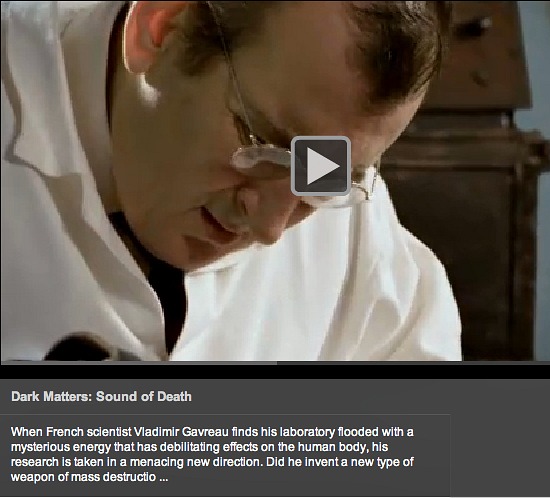 .
Gerry Vassilatos, a high school science teacher and writer of popular science, describes Gavreau’s experience as follows.  While I can’t vouch for the point-by-point accuracy of his narrative, Vassilatos does accurately convey that Gavreau and his team blundered upon infrasound, which they then worked to adapt to military purposes.

Basically, Gavreau and his team fortuitously discovered a Wind Turbine Syndrome Machine which they tried to harness as a weapon.  Except for one insurmountable problem:  They couldn’t control its deadly emissions.

This puts Gavreau about 40 years ahead of the wind developers, with their Industrial Wind Turbine (IWT) Machine—1600 feet from your front door, dear reader.  Like Gavreau, they, too, can’t control its deadly emissions.  Unlike Gavreau, they are dishonest about that inconvenient truth.

The central research theme of Dr. Vladimir Gavreau was the development of remote controlled automatons and robotic devices. To this end he assembled a group of scientists in 1957. The group, including Marcel Miane, Henri Saul, and Raymond Comdat, successfully developed a great variety of ro­botic devices for industrial and military purposes. In the course of develop­ing mobile robots for use in battlefields and industrial fields, Dr. Gavreau and his staff made a strange and astounding observation which not only interrupted their work, but became their major research theme.

Housed in a large concrete building, the entire group periodically experienced a disconcerting nausea, which flooded the research facility. Day after day, for weeks at a time, the symptoms plagued the researchers.

Called to inspect the situation, industrial examiners also fell victim to the malady. It was thought that the condition was caused by pathogens, a “building sick­ness.”  No such agencies were ever biologically detected. Yet the condition prevailed. Research schedules now seriously interrupted, a complete exami­nation of the building was called.

The researchers noticed that the mysterious nauseations ceased when cer­tain laboratory windows were blocked. It was then assumed that “chemical gas emissions” of some kind were responsible for the malady, and so a thor­ough search of the building was undertaken.

While no noxious fumes could be detected by any technical means, the source was finally traced by building engineers to an improperly installed motor-driven ventilator.

The engineers at first thought that this motor might be emitting noxious fumes, possibly evaporated oils and lubricants. But no evaporated products were ever detected.

It was found that the loosely poised low speed motor, poised in its cavernous duct of several stories, was developing “nauseating vibrations.”

The mystery magnified for Dr. Gavreau and his team, when they tried to measure the sound intensity and pitch. Failing to register any acoustic readings at all, the team doubted the assessment of the building engineers. Never­theless, closing the windows blocked the sense of nausea.

In a step of bril­liant scientific reasoning, Gavreau and his colleagues realized that the sound with which they were dealing was so low in pitch that it could not register on any available microphonic detector. The data was costly to the crew.

They could not pursue the “search” for long time periods. During the very course of tracking the sound down, an accidental direct exposure rendered them all extremely ill for hours. When finally measured, it was found that a low intensity pitch of a fundamental 7 cycles per second was being produced. Furthermore, this infrasonic pitch was not one of great intensity ei­ther.

It became obvious that the slow vibrating motor was activating an infra­sonic resonant mode in the large concrete duct. Operating as the vibrating “tongue” of an immense “organ pipe,” the rattling motor produced nauseat­ing infrasound. Coupled with the rest of the concrete building, a cavernous industrial enclosure, the vibrating air column formed a bizarre infrasonic “amplifier.”

Knowledge of this infrasonic configuration also explained why shutting the windows was mildly effective in “blocking the malady.” The windows altered the total resonant profile of the building, shifting the infrasonic pitch and intensity.

Since this time, others have noted the personally damaging effects of such infrasonic generation in office buildings and industrial facili­ties. The nauseating effects of exposure to a low intensity natural or manmade infrasonic source is now well appreciated.

Dr. Gavreau and his research team now carefully investigated the effects of their “infrasonic organ” at various intensity levels and pitch. Changing the spring tension on shock mounts, which held the fan motor, it was possible to change the pitch. Various infrasonic resonances were established throughout the large research building. Shutting the windows blocked most of the symptoms. When the window was again opened, however weak as the source was made, the team felt the nauseating effects once again.

In the business of mili­tary research, Dr. Gavreau believed he had discovered a new and previously “unknown weapon” in these infrasounds. Aware of the natural explosives by which infrasonics are generated, Dr. Gavreau began to speculate on the ap­plication of infrasonics as a defense initiative. The haphazard explosive ef­fects of natural infrasound in thunderclaps were quite effective in demon­strating what an artificial “thunder-maker” could do. But, how could a thun­derclap be artificially generated in a compact system? These thoughts stimu­lated theoretical discussions on the possibility of producing coherent infrasound: an infrasonic “laser.”

The first devices Dr. Gavreau implemented were designed to imitate the “accident” which first made his research group aware of infrasonics. They designed real organ pipes of exceedingly great width and length. The first of these was six feet in diameter and seventy-five feet long. These designs were tested outdoors, securely propped against protective sound-absorbent walls. The investigators stood at a great distance. Two forms of these infrasonic organ pipes were built. The first utilized a drive piston, which pulsed the pipe output. The second utilized compressed air in a more conventional manner.

The main resonant frequency of these pipes occurred in the “range of death,” found to lie between three and seven cycles per second. These sounds could not be humanly heard, a distinct advantage for a defense system. The effects were felt, however. The symptoms come on rapidly and unexpectedly, though the pipes were operating for a few seconds. Their pressure waves impacted against the entire body in a terrible and inescapable grip. The grip was a pressure which came in on one from all sides simultaneously, an enve­lope of death.

Next came the pain, dull infrasonic pressure against the eyes and ears. Then came a frightening manifestation on the material supports of the device itself. With sustained operation of the pipe, a sudden rumble rocked the area, nearly destroying the test building. Every pillar and joint of the massive struc­ture bolted and moved. One of the technicians managed to ignore the pain enough to shut down the power supply.

Dr. Gavreau and his associates were dangerously ill for nearly a day after these preliminary tests. These maladies were sustained for hours after the device was turned off. Infrasonic assaults on the body are the more lethal because they come with dreadful silence. The eye­sight of Dr. Gavreau and his fellow workers were affected for days. More dangerously were their internal organs affected: the heart, lungs, stomach, intestinal cavity were filled with continual painful spasms for an equal time period.