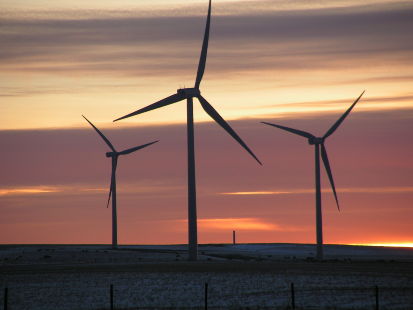 “Going against the wind: Anti-development symposium set for Saturday in Ashton”

ASHTON – A wind farm debate that has stirred passions across the country touches down here Saturday.

More than 100 people are expected at an anti-wind energy symposium in the village’s tiny gymnasium, where discussion is scheduled on the possible side effects of long-term exposure to wind farms and the economics of commercial wind development.

“People need to be informed about the stuff that the wind farm salesman won’t tell you,” organizer Kelly Robery said. “We don’t want to see our neighbors get the shaft … we don’t want them to get the short end of the deal.”

Robery is part of a year-old group called the Lee County Informed, composed of about 10 families fighting to block an international wind farm developer from starting up in and around Lee County.

Representatives from RES headquarters could not be reached for comment Thursday.

Ed Uphoff, a former village trustee in Franklin Grove, said RES contacted him when he was working as the village’s economic development officer.

“They wanted to work with us, let us know they were in the area,” Uphoff said.

Pierpont wrote that people living within 1.25 miles of wind turbines often feel sick to the point of abandoning their homes.

Robery called the visual effect that a new 151-turbine wind farm has on the DeKalb County village of Shabbona “devastating.”

Uphoff said the effects are no different than the sensation of playing video games.

“It’s the same thing that happens to people that play video games in their own homes,” Uphoff said.

Attorney Rick Porter also is scheduled to speak at the symposium. He is defending a group of DeKalb County residents who aim to force Florida Power and Light to shut off the new wind farm covering Shabbona.

RES has undertaken the development endeavor in fierce competition with some of the world’s biggest wind farm builders.

RES volunteered to have a representative at Saturday’s meeting, but Lee County Informed declined the offer, Robery said, adding “the agenda was already full.”

“We are not radicals,” Robery said. “We just want people to know both sides of the issue.”

The documents sometimes contain language revoking the company’s payout to landowners if they discuss lease terms or speak badly about the company in a public setting, Robery said.

“People may sign these without fully knowing what they’re signing,” Robery said. “We want a lawyer to talk about this.”


Comments Off on Wind Turbine Syndrome gains traction in Illinois