"Wave after wave of nausea awakened me" (Ontario, Canada) 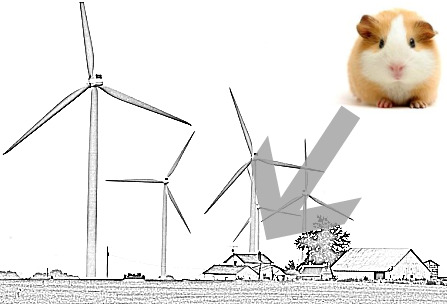 (Based on photo by the IndyStar.com, with appreciation)

Wave after wave of nausea awakened me around 5 am. Since I won’t take drugs, no matter what I did, I couldn’t settle the nausea.

My ears were stuffed.  I was just as tired as at 11 pm (bedtime), when I couldn’t keep my eyes open any longer nor hold my head up. (I was trying to answer an e-mail but just could not.)

By 7 am I was completely distraught.  Many of my muscles would not cooperate. I was shaking and almost blubbering when I called the Ministry of the Environment (MoE) and spoke to X, who advised me to “pull myself together.” I replied that I was going to leave my home. I drove shakily the 15 km to my son’s and begged him to drive me to Simcoe, 50 km from my home and the turbines.

Soon, I started to feel better, well enough to call X at MoE. I was composed and able to answer the questions for his report.  (Another report, however, is not going to bring about a permanent answer to the debilitating effects these 18 wind turbines, within 3 km of my home, are having on my body.)

My son drove back to his home and I had a short window of time to safely (?) drive back to my home, steeling myself to the ringing in the ears, loss of muscle control, and the inability to write this email.

12:30 pm, a computer glitch prevented me from sending this email and so, slowly and laboriously, I have pecked my way through it again.

Still coherent at 4 pm, but I don’t know whether I’ll be able to stay here the whole day.

I’m at a loss about a life-saving strategy. Please reply with your suggestions.

A local group says they were ignorant about the health effects wind turbines have on humans and they now want them gone.

The “Norfolk Victims of Industrial Turbines” group spoke to council last night at the town hall meeting in Vittoria. Member Stephana Johnston says she dreads being at home because she says she’s being tortured while she’s there due to the low frequency vibrations.

Norfolk Mayor Dennis Travale says the provincial government’s Green Energy Act essentially takes away the authority of local councils on the matter. Simply put, a developer can go and make an arrangement with a landowners and has free rein and there’s really nothing council can do to stop them.

Anyone wishing to have their health concerns heard should contact the Ministry of Health and Long Term Care and copy the Premier.

Johnston says she’s been “green” for many years and admits she was originally in favor of the turbines but has since changed her mind once she found out the health risks posed to residents who live nearby.