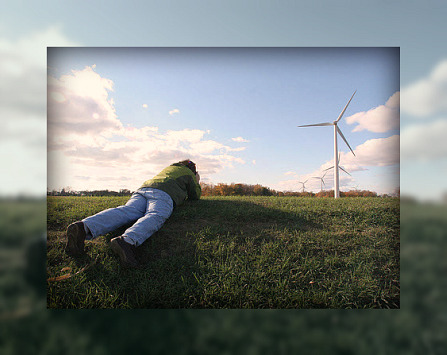 First, read this, taken from Two homes have been abandoned in “Turbine Town”:

I am angry, helpless, and disappointed our government would let something like this happen. I am appalled at their ignorance and lack of compassion. It saddens me to watch my family and friends suffer from the same [health] effects of the turbines.

I spend as much time as I can away from my home, away from my son who is also sleep deprived. We are exhausted and miserable. I often seek refuge with friends, often falling asleep minutes after I arrive.

What was once a beautiful place to live has been destroyed.

Then this, taken from “My entire house was vibrating along with all the contents — including me”:

My entire house was vibrating along with all the contents—including me. I tried to lie down and sleep a few times, but got jolted awake with a full body twitch each time. My skull was resonating to the extent that I became swimmingly dizzy, even just sitting, with sharp pains developing in my head. I was nauseous, I was aware of my insides trembling. . . . I could feel my fingers tingling with the vibrations. My eyes started to blur, an indication of oscillating eyeballs. The only alternative was to get out, and I did so in tears.

With all of this, I couldn’t really “hear” anything except the low droning hum that I have described to you in other reports over the summer. I ended up sleeping on a couch in a house 20 km directly to the north of me, and as I did, I could still hear and feel the deep, rumbling vibrations from the wind farm. These vibrations are similar to ones I’ve felt produced from a power steamroller as it approaches my house.

Having to sleep in my truck, having to drive to somebody else’s house in the middle of the night in order to escape, I now consider myself “homeless.”

Then this, taken from “Silent Spring”:

I hear the call of killdeer outside, and it occurs to me that this isn’t the first time I’ve heard them at strange hours of the night. They seem especially agitated. It strikes me that they, these birds that roost on the ground, are feeling what I’m feeling, perhaps to an even greater degree since they have direct contact with the ground.

The turbine vibrations have awakened them, as well, and they are flying around to escape them. In fact, these poor creatures have it even worse than I do because they have to keep flying and expend energy in order to be free of the vibrations that are disturbing what they had deemed home for the night.

Have I told you there are no frogs in my pond this year?

Now brace yourself for this last one:

For documentation purposes: Two suicide attempts in the tiny village of Clear Creek over the past 2 months. The most recent one yesterday, successful, right across the road from me.