"I have not heard one single complaint." Really?! 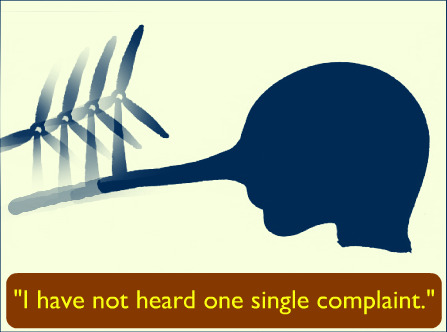 “Nicole Geneau, project manager with NEXTera, along with two consultants, visited Brockton council [Ontario, Canada] to provide information on two six-turbine sites planned for lands near Formosa and Paisley.  Geneau told council her company is the largest owner and operator of wind turbines in North America, with 8,200 operating in 65 different projects across 24 states and two provinces.

“‘I have not heard one single complaint,’ Geneau said. ‘That tells us the process we’re using is working. We use the best science and follow regulations'” (The Walkerton Herald-Times, Ontario, Canada, 8/20/09).

“Ms. Geneau, I’m sure you remember sitting at Daniel d’Entremont’s kitchen table only weeks before this meeting [above].  He had to abandon his house in Feb 2006 with family in tow and still has no resolution and no home.

“Nicole Geneau along with Josie Hernandez and Winston Kutte were sitting at Mr. d’Entremont’s kitchen table in Nova Scotia on July 25th [2009], only two weeks prior to these Ontario meetings [above], saying that they didn’t know what they could do for him. He would just have to walk away and start over again.

“He has since been told by NEXTera they don’t have enough money to offer any compensation whatsoever, with everything else they have to do, like buying a new office location. And so Daniel, his wife and children are moving around, living with understanding relatives with no place to call home” (Wind Concerns Ontario, 8/20/09, emphasis added).


Comments Off on "I have not heard one single complaint." Really?!