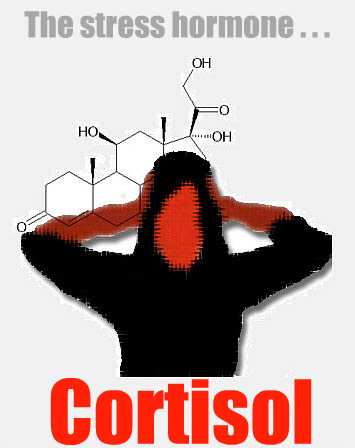 This posting is for people living near wind turbines.  (Everyone else can ignore it.)  It’s about a retired postal carrier and his cortisol levels.  After Gerry Meyer retired from the Post Office he began a whole new and unexpected career as a Wind Turbine Syndrome guinea pig.  Sound familiar?  (Read about his ordeal in The Brownsville Diaries and Our Wildlife Have Disappeared.)

At any rate, since the turbines started operating March 2008, he’s noticed his cortisol (stress hormone) levels fluctuating wildly.  Of course at first he didn’t focus on cortisol—he’s not a clinician, after all.  He merely knew his body was acting weirdly in a host of ways.  Then, last spring (2009), Nina Pierpont urged him to get his cortisol checked.

So he did.  And this is what he’s finding out.

First, by way of background, in his words:

Gerry’s an active man.  He spent his adult career as a rural mail carrier (check out those leg muscles).  He’s a gardener (see the picture).  He’s a hunter.  He’s a big four-wheeler fan.  He’s someone who is pretty well tuned to what his body is feeling and doing.  And he’s experiencing what are for him large weight swings.  When the turbines are off for some days, his weight drops.  When they’re on (which is most of the time), his weight shoots up.

Last spring, as I say, Nina Pierpont recommended he get his cortisol levels checked—ideally, if he could, comparing levels when turbines are off to when they are on.

Recently, none of the 86 industrial turbines were turning “for 14 hours short of 21 days.”  For 20 days he and his family had peace and they felt fabulous, he reports.  Alas, “they began turning again about 3:30 Sunday afternoon.”  That was October 18.  The following day he had his cortisol level checked.

“Today [October 23] the clinic called and told me the results.  ‘Dramatically lower,’ the nurse told me.  This time the number was 35 compared to 254 in July.”  (By the way, he adds, “I lost 16 pounds during the shut-down period, without eating any differently.”)

“I believe I can feel when my cortisol level is high, or the conditions are right for problems. My stomach feels full, yet I have the urge to eat. At the same time it feels like food is in my throat. This might seem strange, but that is what happens when my weight goes up. I am sure I am eating less, not snacking late at night and not eating much of Cheryl’s homemade-crust apple pie.”  (Note:  Gerry, if you could send some of those apple pies to 19 Clay, Malone, I’d be much obliged.  We don’t have to tell Nina, okay?) 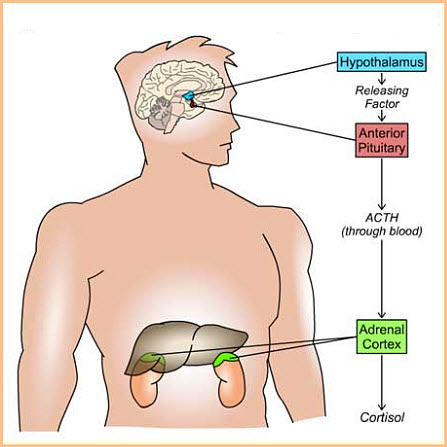 With appreciation to stanford.edu

What’s important about cortisol?  The following is pinched from that great fount of knowledge, Wikipedia:

Cortisol is a corticosteroid hormone or glucocorticoid produced by the adrenal cortex, which is part of the adrenal gland.  It is usually referred to as the “stress hormone” as it is involved in response to stress and anxiety, controlled by CRH [cortico-tropin releasing hormone]. It increases blood pressure and blood sugar, and reduces immune responses. Various synthetic forms of cortisol are used to treat a variety of different illnesses. The most well-known of these is a natural metabolic intermediary of cortisol called hydrocortisone.

There is also significant individual variation, although a given person tends to have consistent rhythms.

You begin to get the idea.  Discuss it with your physician—I am not one.

Anyhow, if you’re living near turbines and you notice anything about weight gain and weight loss that seemingly is triggered by the turbines, post a comment here.  And if you get your cortisol levels checked and notice a correlation to turbine exposure, again post a comment here.  If there seems to be a goodly number of anecdotal cases like Gerry’s, maybe we can get physicians interested.


Comments Off on Cortisol and Wind Turbines (Wisconsin)